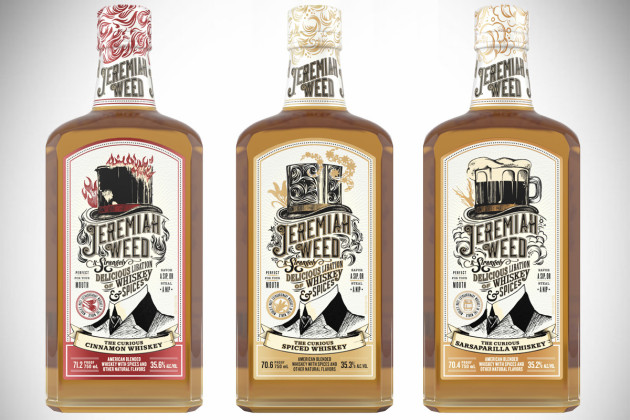 Last fall, Jeremiah Weed introduced a new line of curiously delicious whiskeys crafted with hand selected secret spices and natural flavors. If you haven’t tried them yet, you don’t know what you’re missing! Each variant is sure to bewilder and amaze as they take the stage as either a shot or mixed with cola.

The main attractions and their relevant plot lines include:

As you can see in the photo above (click to make larger), Jeremiah Weed Whiskeys’ labels display a faceless man with intricate designs specific to each variant spiraling from his top hat. It’s a pretty sweet label design.

In celebration of the launch of these whiskeys, we’re participating in a fun competition against some other bloggers. The task? To design a kick-ass Jeremiah Weed Whiskeys t-shirt!

This is where we need your help. We’re looking for some ideas for this t-shirt design. The winning blogger gets bragging rights, along with 50 shirts to share with their readers (age 21+). So help us design a winning t-shirt, and we’ll make sure you get a few shirts for your efforts.

We’ve only got until next Friday to finalize our t-shirt design, so if you’ve got some good ideas, let us know in the comments section below. Thanks!

Related Topics:Jeremiah Weed
Up Next