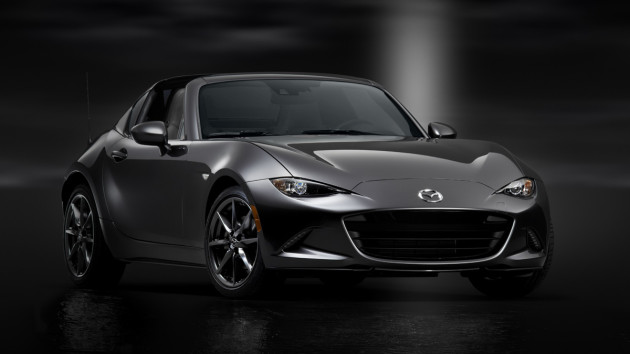 If you’re a regular reader of the site, you know that we’re HUGE fans of the 2016 Mazda Miata, giving it high praise after our first drive of the 2016 Miata, and again after spending a week with the all-new Miata.

Last night, Mazda held a special event in New York City where they introduced the Mazda MX-5 Miata RF to a stunned crowd. The “RF” in the name stands for retractable fastback, and it had everyone in the audience drooling at first sight.

The MX-5 RF features fastback styling with a smooth roofline that slopes down to the rear end, and its unique rear roof and retractable back window offer a new open-air feeling. The power roof can be opened or closed at speeds of up to 10 km/h with the press of a button, and the roof is stowed compactly and efficiently in a limited space. Yet despite its fastback styling and hardtop roof, the MX-5 RF offers the same amount of trunk space as the soft-top model. 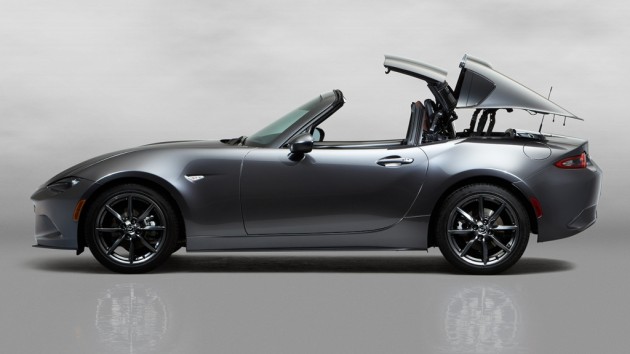 I wanted to introduce the fun of driving a lightweight sports car to a broader audience, and it was my love for the Mazda MX-5 that gave birth to the design of the new MX-5 RF. If we consider the soft-top model to represent the purist appeal of the lightweight sports car, which we recently honed in a stoic effort to reach new heights, then the retractable fastback represents a new type of MX-5 that aims to be a compact sports car with a natural charm that anybody and everybody will find beautiful.

I figured the addition of a hardtop version of the fourth-generation MX-5 demanded that we introduce a sleek fastback design with a smooth line joining the roof to the rear end if we were to create a look of beauty that would appeal to all. I considered this point critical to the design, and didn’t waver over that conviction for a moment. To convey the fun and charm of the MX-5 experience to a larger, more diverse range of people rather than just sports car fans, I felt the MX-5 RF must embody natural beauty and not attempt to attract attention by merely being different.

This led me to quickly decide to adopt fastback styling. The rub was that this also became the biggest hurdle in designing the MX-5 RF. It may not look like it at a glance, but this is a car with a retractable roof! It’s a car that lets drivers enjoy the pleasure of open-air driving along with a unique sense of being ensconced securely in the cabin! It would be impossible to achieve a combination of this new form of driving pleasure and beautiful fastback styling if I applied conventional thinking. Anything short of creating a new design expression and teaming up with the design and production engineers to approach the project with passion and determination as a team, and the whole concept would be just pie in the sky.

I am hoping the MX-5 RF will surprise a wide variety of people and contribute to increased interest in the MX-5, while increasing the number of people who enjoy the car’s beauty and the pleasure of driving without limiting the appeal to those interested in sports cars.

You can watch the retractable hardtop in action here:

Kudos to Mazda for breaking the bounds of conventional thinking to create something entirely new. The car is absolutely gorgeous, slightly more practical than it’s soft-top variant, and I seriously want one.

If you’re headed to the New York International Auto Show, make sure you stop at the Mazda booth and check out the Mazda MX-5 RF in person. 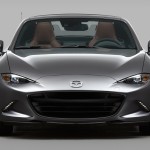 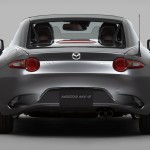 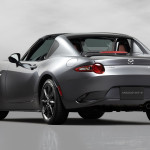 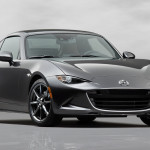 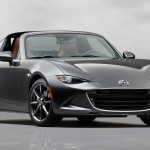 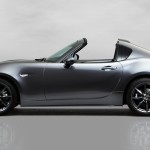 Related Topics:MazdaMazda MX-5 RF
Up Next