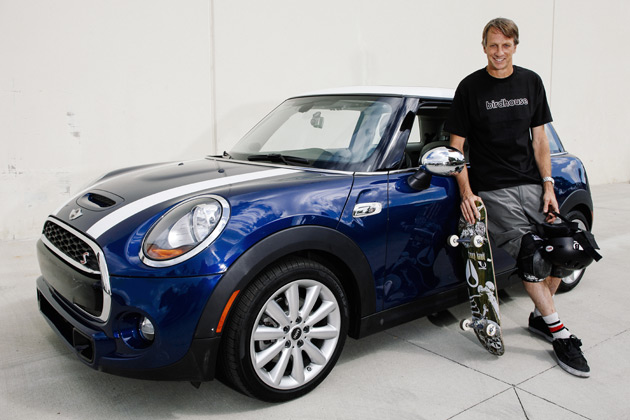 MINI USA has just announced a partnership with skateboarding legend Tony Hawk. Unable to contain the excitement on both ends of the table – or ramp – Tony and the MINI team pulled off an exhilarating, one-of-a-kind skateboard stunt to announce the partnership, which you can see at MINIUSA.com/tonyhawk.

MINI will become the official vehicle of Tony Hawk’s Birdhouse Skateboards Summer Tour, meaning some of the world’s best skateboarders will be motoring from city-to-city this summer in a fleet of customized MINI Countryman. In addition, Tony will make a number of appearances at MINI events and design a co-inspired, limited-edition skateboard that will be auctioned off for charity and given away as prizes at events around the country.

“Tony Hawk is an original and an icon, who, over the years has built a loyal community of individuals around him and his brand who share a common interest and an active lifestyle,” said Lee Nadler, Manager of Marketing Communications, MINI USA. “The MINI brand and the MINI community share many of those same passions when it comes to originality, customization and style. Our partnership was a natural fit.”

In addition to sponsoring this summer’s Birdhouse Tour, MINI will also support the Tony Hawk Foundation by sponsoring the Stand Up for Skateparks event at the 11th-annual action sports carnival on September 21st, 2014 in Beverly Hills, Calif. The event will showcase the best talent from the world of skateboarding and BMX. MINI will also be donating to a number of live and silent auctions to benefit the Foundation, which awards grants to underprivileged communities to help fund the building of skateparks around the country.

“Owning and driving a MINI is like skating and being a part of the skateboarding culture and community,” said Hawk. “MINI and skating are about design and self-expression; they are about building a community around something that is otherwise very individual.”

Both considered icons by their loyal fan base and communities, Tony Hawk and MINI have shared a unique alliance since last November when Tony purchased – and jumped over – his own MINI John Cooper Works Countryman. The buzz around Tony and his new MINI gained even more attention when Tony held a contest on his social channels asking his fans to name his new MINI, a tradition among MINI owners. Tony’s MINI is now called “Maximillion,” after Gumball 3000 founder Max Cooper.

Related Topics:MINITony Hawk
Up Next

5 Of The Coolest Cars On The Road