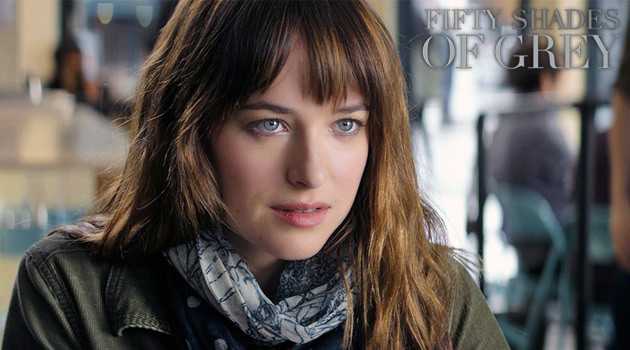 In the midst of the Twilight phenomenon, presumably in a deep, dark hole somewhere, E L James wrote some fan fiction that ended up spouting into three of the most notoriously awful, and yet inexplicably popular book trilogies the world has ever seen. Milking out cash from the utter of bored housewives across America, the Fifty Shades of Grey novels have managed to transcend endless parody, ridicule, and protest from just about every demographic that it represents, and now they’ve finally got themselves a movie to go along with it, and a fairly stylish looking one at that. Leave it to one brilliant remix of a Beyonce classic to make just about anything look sexy, especially when that anything happens to be this garbage…

Anastasia Steele (Dakota Johnson) is a repressed twenty-something journalist living in a small apartment with her best friend Kate (Eloise Mumford). One day, she comes into the interview of her life when she finds herself in the office of billionaire Christian Grey (Jamie Dornan), who seems to take an interest in her. In fact, he takes a bit too much of an interest in her, almost immediately wanting to be everywhere she is, and know everything she does. You see, Christian is a bit of a kinky boy, and he wants Ana to sign a contract that will make her into his own personal submissive sex toy that he’ll then get to experiment on in a place he ever so charmingly refers to as his “playroom.” Yes my friends, Hollywood has heard you loud and clear. Finally, we get a movie where a rich and powerful white man gets to assert dominance over a woman.

Believe me, I’m about to take a dump on this movie big enough to give Christian Grey a hard on, but first, let’s give credit where it’s due. For as bad as this movie stays through it’s entirety, the first half manages to transcend this somewhat, with a solid sense of humor making the painful story a little more bearable. Much of this humor comes from Johnson’s performance, who gives Anastasia an understated charm and sly sense of humor that leads to some fun reactionary moments, especially when Christian starts to really get creepy. There’s a couple scenes in here that genuinely work, and it’s when Johnson is allowed to let Anastasia transcend the role the story so desperately wants to force her into, and starts manipulating Christian’s sex drive to a place where it makes her comfortable. It’s nothing special, and the character will be quick to contradict what she says with what she ends up doing, but at least there is something of a pulse in this thing for a while. Also, while the ending of this film isn’t conclusive (there are two more of these things coming), it sure as hell should be, a gutsy and powerful final note to go out on that sends the right message to it’s target audience.

What consistently stops up any momentum this has going is not only just how psychotic and creepy Christian Grey is a character, but just how badly Jamie Dornan plays him. Unlike Johnson, he buckles under the terrible material, with not a moment of charm or nuance making his behavior seem even slightly approachable. Grey is scarred by a tragic backstory, but he’s such a monster that ultimately, I found myself hoping that even worse had happened to him so he would not be standing in front of me now. He’s flat out creep straight out a horror movie, stalking and inhibiting Anastasia far before the contract is ever even mentioned, and as such, there’s never a moment where we root for these two. It doesn’t help that Johnson and Dornan don’t have a lick of chemistry, with any sexual interplay between the two coming off as completely forced.

Fifty Shades of Grey is a repulsive experience at the movies, delivering none of the shock value or intrigue one may expect from something so famous for being erotic. Beyond that, it’s just a terrible story, with trite character types we’ve all seen before just pacing through the motions, with a particularly reprehensible lead character in Christian Grey. There are so many interesting directions that this could have taken, particularly since our society is more accepting of sexuality than it’s ever been, but we go in none of them here. It doesn’t even work as trashy fun after the first half, ultimately becoming so grim and boring that it’s almost impossible to walk out feeling anything but dirty and sad. If this is what we consider the love story for this day and age, then we as a society have some serious work to do.

Review Of ‘Kingsman: The Secret Service’