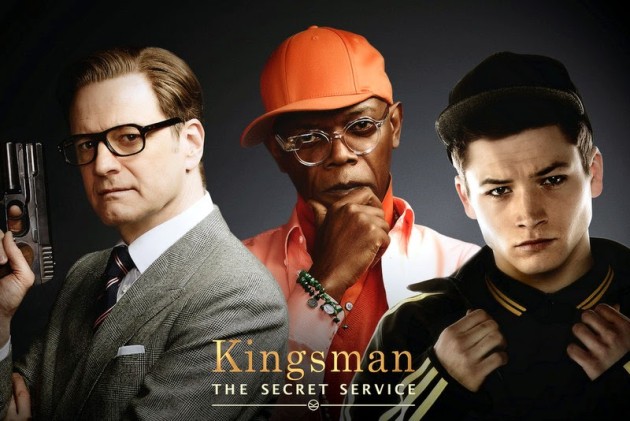 Normally, I find myself in agreement when a large group of movie fans gravitate towards the work of certain author or artist. But as the years go on, I find myself continuously baffled by the fascination with the works of comic writer Mark Millar, author of Kick Ass and Wanted. I won’t deny that there certainly is style to his work, but it continuously comes off as being needlessly mean spirited without anything particularly clever to justify just how extreme his characters, and the action sequences they find themselves in go. As such, I was deeply skeptical and a little annoyed going into Kingsman: The Secret Service. After all, it seemed to basically have the same premise as Wanted, sans assassins with added spies.

This time, that premise centers on Eggsy (Taron Egerton), a troublemaking hoodlum with next to nothing to loose despite his impressive intellect and strong acrobatic skill set, that is until he discovers that his birth father is a deceased member of an elite agency of dapper and ruthless spies called The Kingsman. Arriving to tell him all this as well as mentor him is Harry Hart (Colin Firth), a man as put together as a world class skyscraper, and as dangerous as a nuclear bomb. With Hart’s recommendation, Eggsy joins a rigorous training program, while vocally challenged billionaire Richmond Valentine (Samuel L. Jackson) plans to wipe out a large portion of the population with mind control SIM cards that make the users violent.

At the outset, Kingsman seems like yet another over-stylized excuse to blow up heads while dropping F-Bombs. There’s no easing into the movie’s ridiculous world, so the action starts out straight out goofy instantly, and at first, it’s just flat out off-putting Beyond that, the set up for Eggsy’s struggles is beyond cliched, with the whole reckless delinquent with a heart of gold act being beyond played out at this point, but then, Colin Firth arrives…

I’ve been down on Colin Firth for many years, finding him to be a stiff and boring screen presence who just sleepwalks through the same dry British drama over and over again. However, he is an absolute lightning rod here, taking the most endearing parts of his subdued persona, turns them up to eleven, and still appears more relaxed in front of the camera than ever before. Embodying the classic Roger Moore style spy to the best possible degree, while still giving him an edge that those types of characters tend to lack, Firth is the first step in establishing what this movie ends up becoming, a surprisingly clever subversion of typical spy tropes, especially those found in the more classic ones.

Little by little, the movie’s charm starts to reveal itself, and while there are a couple moments that divert into the typical Millar stupidity, the movie will often wisely sidestep that at just the right moment and do something clever instead. Not only does the story start to take some really nice turns, but the other characters really start to open up too. Egerton proves to be a charming and slyly funny leading man with great star potential here, giving Eggsy just enough humanity to make us identify with him, while also letting him retain a certain hardness somebody of his background would have. Meanwhile, Samuel L Jackson steals every scene he’s in as Valentine, affecting a strange lisp that makes any of his evil monologging flat out hilarious to listen to, even when he actually proves to be a fairly menacing foe. The only one who’s a little wasted here is Michael Caine, who’s given a very stock role as the leader of the Kingsman, with really only one scene to really shine.

It also helps that comic book movie veteran Matthew Vaughn’s direction here is as slick as it’s ever been. He finds the perfect moments to inject something creative or absurd into the mix (believe me, this film feels like a Zucker brothers parody at times, and a good one at that) while absolutely excelling in the action department. While all the action sequences here are impressive, with dynamic camerawork and just the right amount of exaggerated slow motion, special mention must be given to a sequence midway through that involves Colin Firth, a large conjuration of racists, and a classic rock and roll standard. With spot on stunt work (most of it by Firth, which deeply impresses me) and some of the most dynamic fight choreography I’ve seen in years, Vaughn crafts a sequence that puts nearly all of his contemporaries to shame, and makes the price of admission worth it on it’s own.

There are moments where the self awareness does shoot the movie in the foot though. And every so often, characters will speak of other spy films in a way that just comes off as self congratulatory, like the movie is reviewing itself. It’s a move straight out of the Quentin Tarantino handbook, and it just does not work as well as Vaughn seems to think it does. Movie, don’t review yourself, that’s my job, just do you. Thankfully, it’s not too abrasive as to distract from the fun.

Kingsman: The Secret Service is far from anything we haven’t already seen before, but it knows that, and just decides to have fun instead. It starts off very rocky, and sometimes gets a little too in love with itself for it’s own good, but in exchange for something that becomes this funny, and so full of velocity, that is more than forgivable. If anything, it’s made me majorly rethink my opinion on Colin Firth, and hate Mark Millar a little less, and as far as I’m concerned, that’s a victory in and of itself.