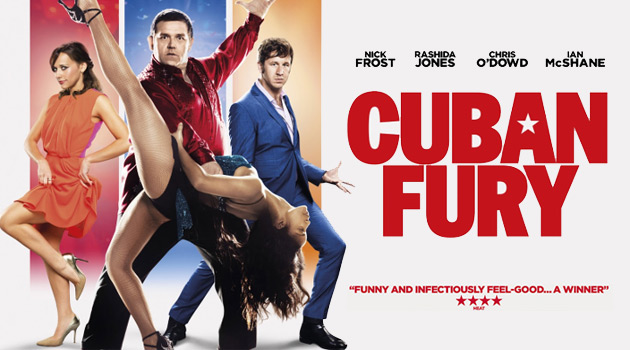 One of the toughest decisions that you have to make with your girlfriend, spouse or even your parents is on what movie you should see. It can’t be too raunchy for Mom, there can’t be too much nudity for your girlfriend, and it can’t be plain old stupid for your wife. A few days ago, my girlfriend and I had the opportunity to attend an early screening of Cuban Fury, and I thought it fit the bill perfectly.

Cuban Fury tells the story of Bruce Garrett (Frost), who in 1987 was a salsa dancing prodigy, until he was jumped and picked on by a gang of bullies who throws his man card into question and destroys Bruce’s confidence. Now 25 years later, Bruce is stuck at the office with zero confidence and a few added pounds since his former days of a dancer. He is constantly belittled by Alpha male antagonist Drew (Chris O’ Dowd) and can’t find comfort in life. This is until his new American boss Julia (Rashida Jones) comes into the picture. Even though she is way out of Bruce’s league, she has a love for salsa. So Bruce puts his bedazzled shirt and shoes on and begins to dance once more by his former trainer Ron (Ian McShane).

Though Cuban Fury follows a simple formula that is often found in a romantic comedy, it’s entertaining to see Nick Frost play the lead and actually sober for once in a movie. We also get to see Chris O’Dowd not playing the underdog character role that he normally receives. What also makes Cuban Fury worth the watch is that Jones and Frost play off each other so well, and the supporting cast that I don’t mention make it worth a watch. It is refreshing though to watch an R-rated romantic comedy that has your combination of gross out gags and vulgar comedy with the charm of any romantic comedy.

You can watch the trailer for Cuban Fury below:

We had the opportunity to ask star Nick Frost a few questions as well and he is even more hilarious in person then he portrays in his films. He also assured me that I didn’t have to ask just about the movie, he said he was great at “geography!”

So Nick I’m sure you have gotten this a lot recently, how often did you dance prior to the film and what was your training regiment like?

Nick: I trained for about 7 months and just about everyday before we even started to film. It was excruciating. As for me being a dancer, I rather much didn’t enjoy dancing. Even at my own wedding I wanted to just put my head down and not dance. Unfortunately I had too, and I was embarrassed, I honestly think I would rather have my family and friends watch me having sex on the dance floor then watching me dance.

While you were training did you actually go into salsa clubs and practice your dancing there?

Nick: Yes I did. The first time I went I kind of didn’t dance and drank too much and then I looked around realized that no one else is drinking. I mean there was a few people around doing shots but they kind of had the right idea, that you don’t drink and dance. But at the clubs you get to dance with 20 beautiful women and thats kind of in of itself a reward. That’s not how it is where I’m from, you know
you only dance toward the end when you think “Must mate!” “Need woman! and then you dance ‘at’ them and then somehow they’ll find that erotic enough to take you home.

You worked with an amazing cast, just give me one funny thing about any of them or all of them.

Nick: Okay, so I met Rashida once and we hung out for like 5 hours and it was amazing, and then I said the next night; why don’t we have dinner and I’ll pick you up? She said “yeah alright, be outside the hotel about 7:30. I said okay and I was outside at 7:30 because I’m a very prompt person but then it was like quarter to 8, then it was ten past 8, and then I was like “is this a Hollywood thing or what?” Then I got a text from Rashida and it said “hey can you come up to my room, I really need to see you.” And I had a really weird tingle in my tummy and I thought “this could be it, I could be making out with Quincy Joneses daughter.” I went up and I was a bit nervous and I knocked on the door and I could hear a noise and she opened the door and she got her hair brush caught in her hair and she couldn’t get it out. So we spent an hour trying to get it out. Once you start a relationship on that basis, its a really a strong foundation moving forward. I love that she kind of sat around for 40 minutes and thought “should I text him?” like at what point should she abandon hope.

I also wanted to ask who played the female antagonist dancer, because she was fantastic?

Nick: Her name is Yanet Fuentes and she is from Havana, and she has been dancing since she was a kid and she got to a point in her life, where because she is such an amazing dancer they let her leave Cuba and I think she never went back. She does a lot of work with Shakira, she is like her backup dancer. She is amazing to dance with, you know. I don’t know if I
should say this. She does this, no I won’t say it.

You have to say it now!

Nick: Oh I don’t want to but now I’m committed to it. She does this move with her bottom and it’s so compelling to watch. Do you remember the ‘Jungle Book’ where the snake did that thing with its eyes. You just can’t not look at it. It’s amazing.

Thanks for chatting with us for a little bit, It was a pleasure meeting you.

Darth Vader Toaster Burns The ‘Dark Side’ Onto Your Bread