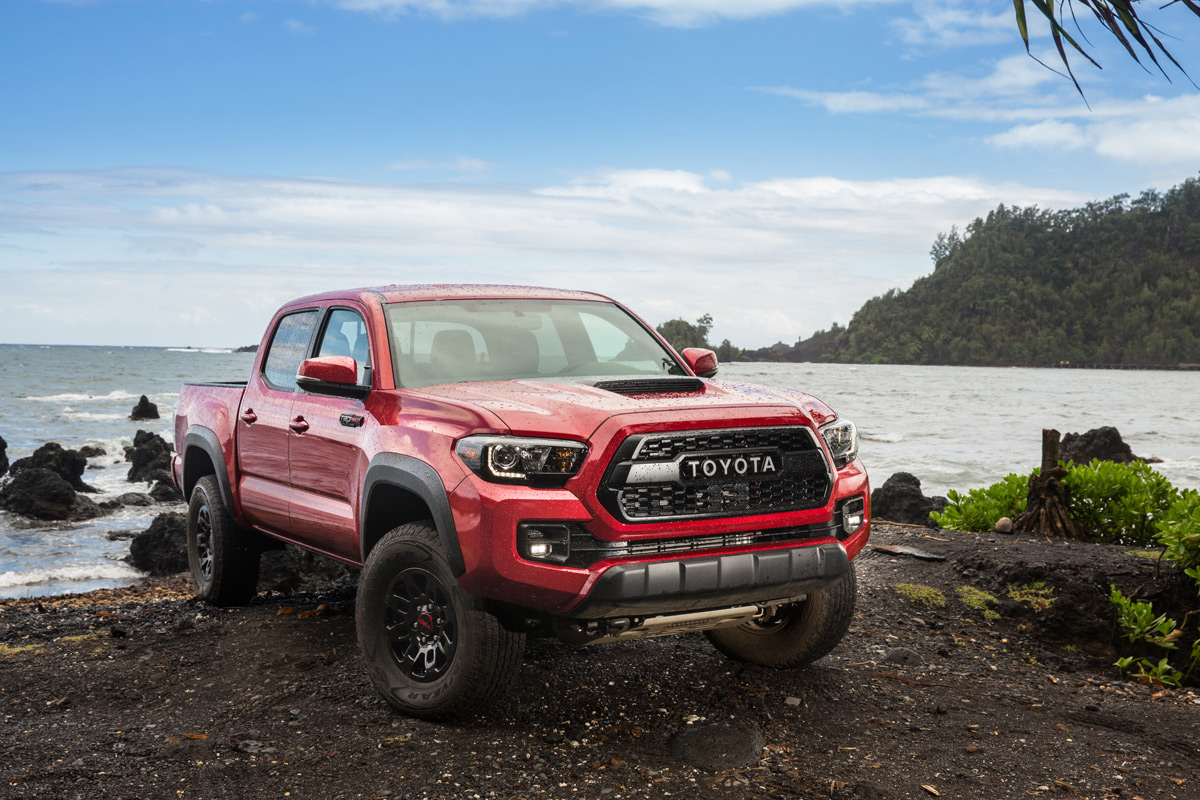 Toyota brought back the TRD Pro package for the 2017 Tacoma pickup truck. We were stoked about that as the TRD Pro is the Tacoma trim level to get for serious off-road fun. The 2017 Toyota Tacoma TRD Pro is available only as a crew cab (“Double Cab”) in four-by-four with a short bed. The towing package is standard, as are better shock absorbers, improved suspension and body clearance heights, skid plates, and a lot more.

The 2017 Toyota Tacoma TRD Pro is made for off-pavement fun. It comes standard with the Tacoma’s V6, which is rated at 278HP and 265 lb-ft of torque. A six-speed automatic transmission or a six-speed manual transmission are offered with that. A special starting mode allows the manual transmission-equipped Tacoma TRD Pro to be started without the clutch being depressed, which eliminates slippage when starting on a steep incline. It’s super useful for those high-incline stall points. 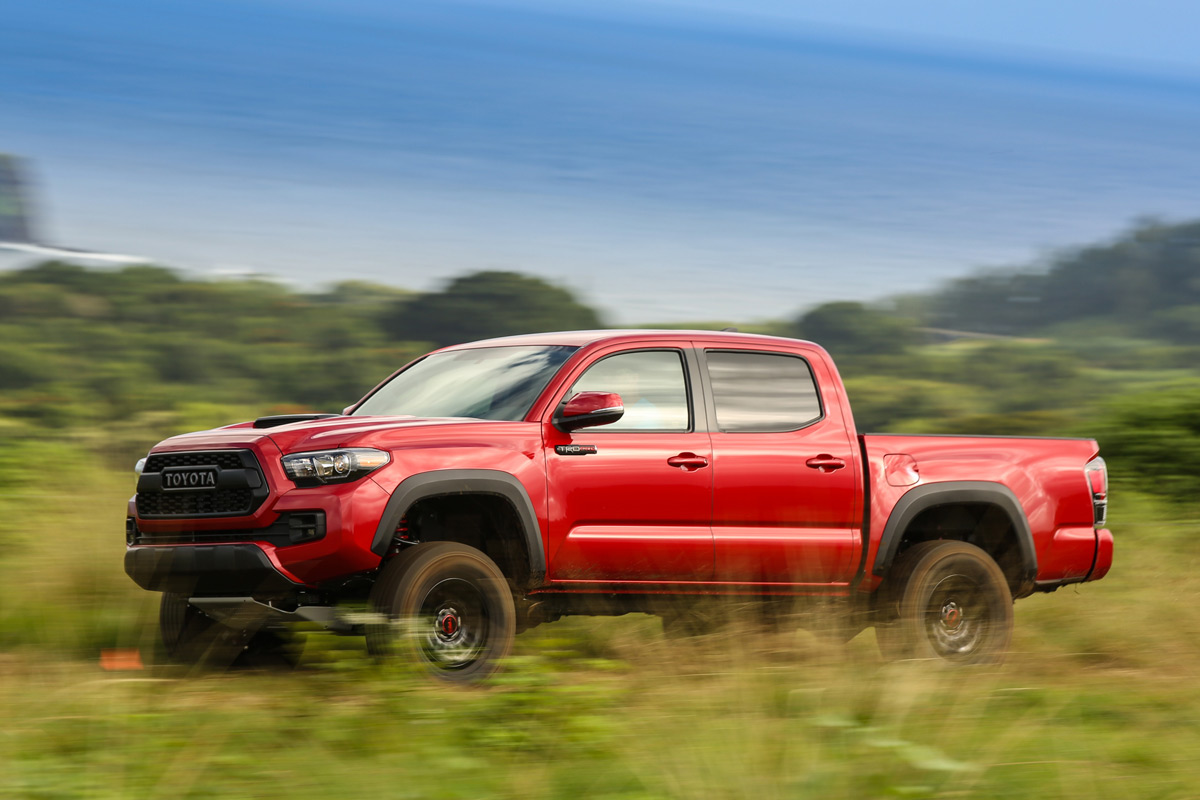 The engine in the Tacoma TRD Pro is a good one, but it still feels sluggish on the road and underpowered when pushing up to speed for a freeway entrance. The TRD Pro model is definitely made for bounding around off the pavement and that’s more than obvious during highway driving. The optimistic EPA estimates of 18 mpg (manual) and 20 mpg combined (automatic) for fuel economy are also not likely to be reality for Tacoma TRD Pro drivers.

Why? Because of the insane amount of equipment that’s mounted to the Tacoma TRD Pro. It’s basically a juiced up TRD Off-Road model, like the one we reviewed last year. It has its own 16-inch alloy wheels, which are unique to this trim, and comes standard with the towing package as well. The Bilstein shock absorbers and the heavier suspension system from the TRD Off-Road are also on the TRD Pro, but the model replaces the lower-end dampers in favor of Fox units. The revised springs on the 2017 Toyota Tacoma TRD Pro lift the body of the truck a bit higher than its model brethren (roughly half an inch) and highlight the big skid plate that’s added to the undercarriage up front. This eliminates the chin spoiler on the Tacoma for an improved approach angle. The TRD Off-Road’s electronic locking rear differential and crawl control (the latter with the automatic only) are also standard on the TRD Pro model. Unique exterior badges, stickers, and other items also denote the TRD Pro, as do the power-sliding rear window glass and LED foglights. 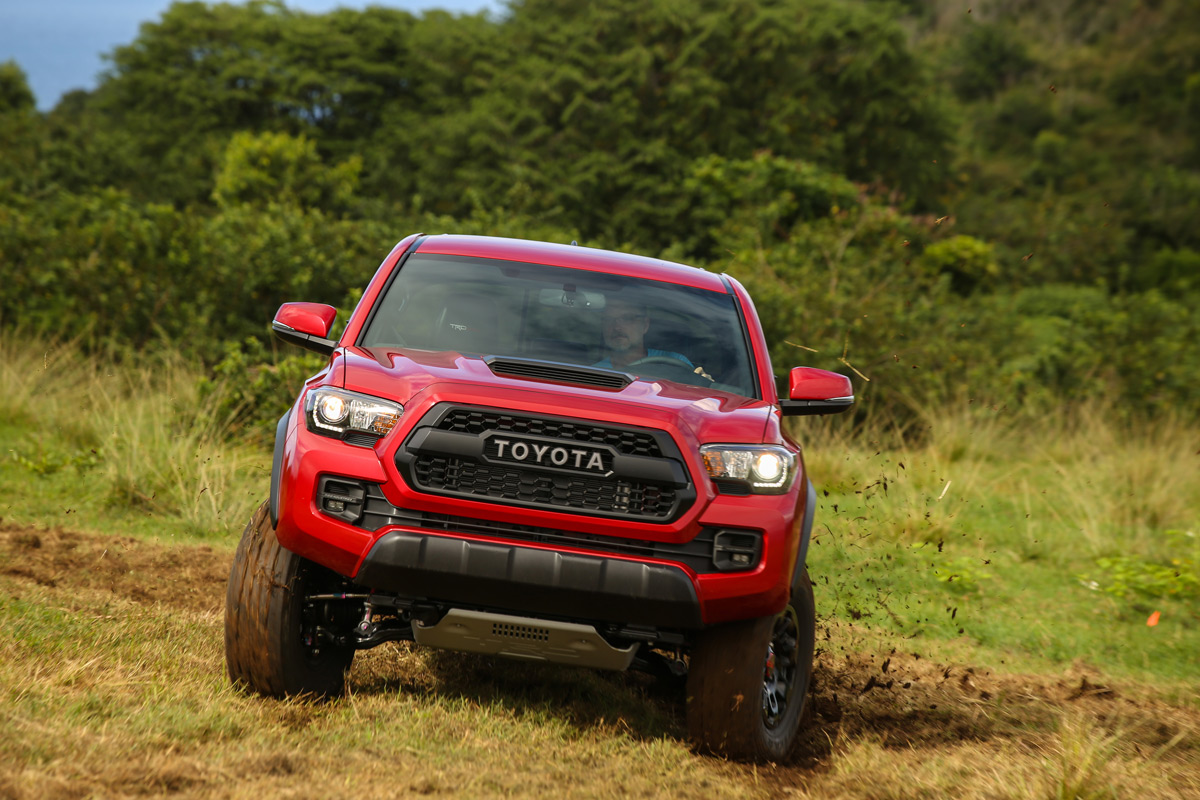 Inside, the 2017 Tacoma TRD Pro showcases why it’s the top-most model trim for the truck. Leather seating is standard as are many of the items found in the lower trims’ Premium and Technology packages such as automatic headlights, dual-zone climate, rear parking sensors with blind-spot monitoring and rear cross-traffic alert, and more. Useful items like a 120-volt power outlet in the bed of the truck (controlled by a switch in the cab), wireless Qi phone charging, and an auto-dimming rearview mirror are also standard in the TRD Pro.

These things and a good basic interior design are reasons to love the Toyota Tacoma overall, from a user’s perspective. We’re still not fond of the sometimes ungainly driver’s position thanks to the weird sports car-like seat setup for the driver, which extends the legs more than what’s normally found in a truck or SUV. This can make stretching to grip the wheel a little fatiguing, especially for taller drivers. The limited tilt-telescope of the steering only makes this worse. The Tacoma is otherwise excellent in its interior fit and no-nonsense finish. We’re also more fond of Toyota’s new infotainment interface than we have been with previous renditions. 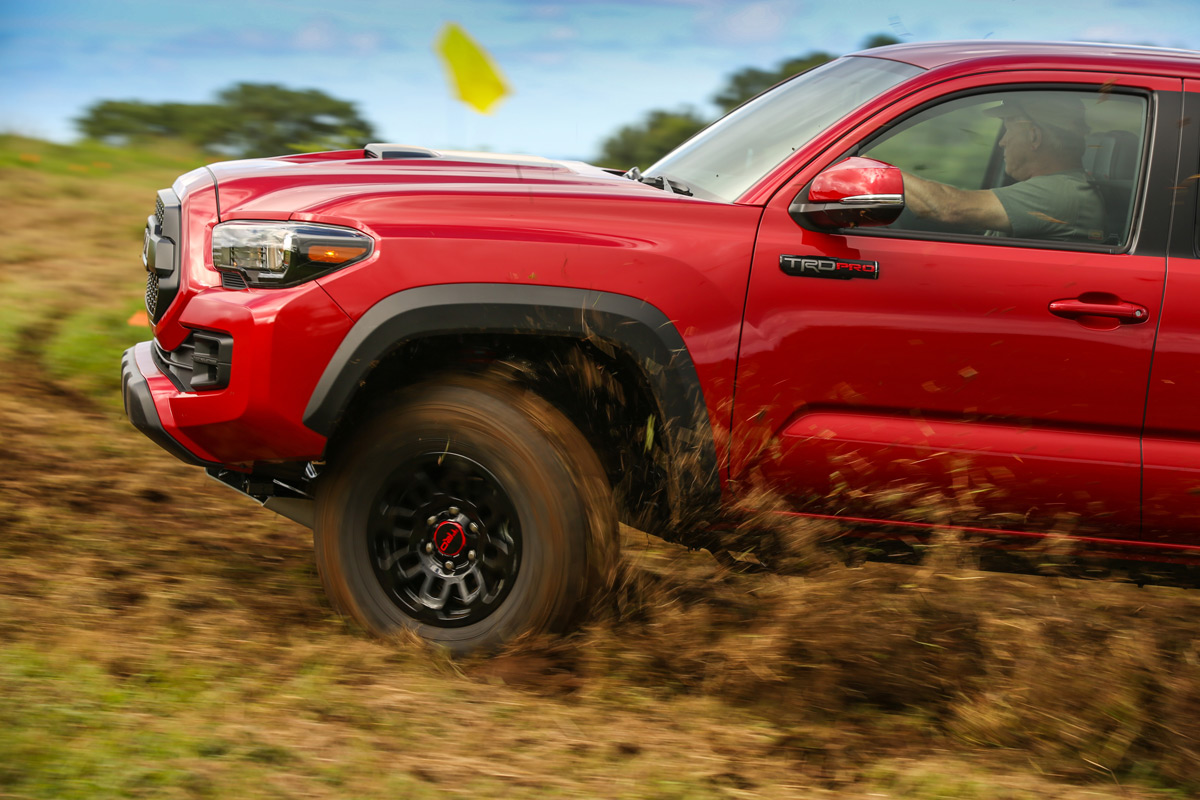 Entune has received some updates and the Tacoma benefits from that, with the upgraded 7-inch touchscreen (6.1-inch is standard) having a nicely straightforward interface that seems fitting for the Tacoma itself, in terms of function creating form as its basic design. Some things that technophiles might want to see, such as CarPlay or Auto, aren’t there and the integration of apps is pretty sparse. Still, it’s a nicely-done setup that is far better than what we’ve seen in Toyota vehicles in previous model years.

Other pickups in the small truck classes, such as the Chevrolet Colorado and its GMC Canyon twin, have a better exterior look. We’re not fond of the Tacoma TRD Pro’s fat lipped front grille or ungainly front overhang. But neither of the GM models can outdo the Tacoma TRD Pro off the road or in the muck. Neither can the more road-friendly Honda Ridgeline, which is a better people-hauler and occasional-use pickup than is the Tacoma in any of its forms. 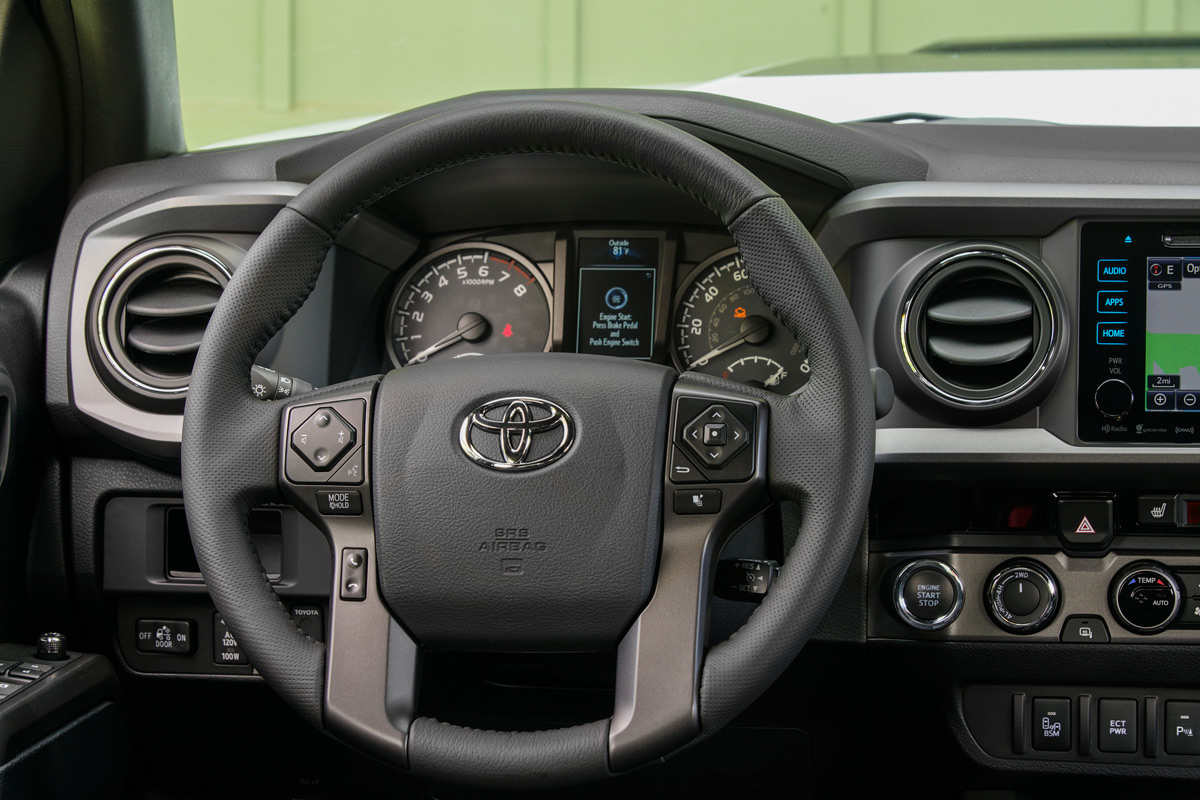 Probably the only rival for the Tacoma at all is in the Nissan Frontier, whose Pro-4X package can definitely give the TRD Off-Road a run for its money. None of these rivals can outdo the Tacoma with its TRD Pro package when off-pavement shenanigans are the game. That could change if the Jeep Wrangler pickup comes to fruition and has a Rubicon package option. But until then, the 2017 Toyota Tacoma TRD Pro is definitely the king of the off-road.

The real meat of the Tacoma TRD Pro, though, is in its capability and focus. We realized that fact after hours of dirt clod throwing, hill climbing, mud-slinging, and back country running in the Tacoma TRD Pro. Not once did we worry about getting stuck nor did we have issue with any of the equipment seeming to be under-par for the terrain. The TRD Pro isn’t an out of the box rock climber or river forder, but it’s got the chops to get into places that other pickups dare not tread. For that, we love the 2017 Toyota Tacoma TRD Pro.