If you didn’t get a chance to catch Sunday’s race, then you may have missed the iconic “Ricky Bobby” paint scheme at historic Talladega Superspeedway. Nope, Will Ferrell didn’t hit the track, but a driver who knows a thing or two about controversy did!

NASCAR driver Kurt Busch, or should we say “Ricky Bobby”, raced in a special Talladega Nights themed “I wanna go fast” paint scheme that showcased “ME” and the infamous cougar on the hood. 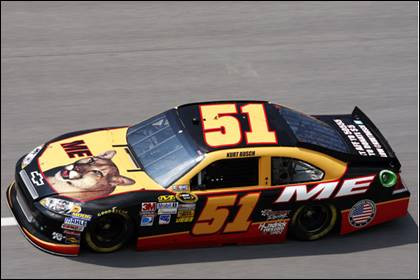 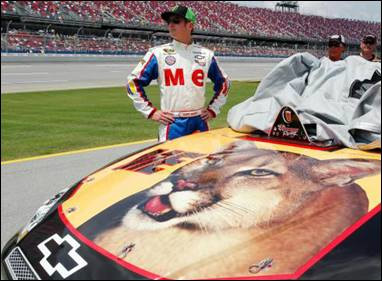 Busch’s girlfriend came up with the idea when the #51 Phoenix Racing car was without a sponsor for the Talladega race. Instead of leaving the car blank, she and Busch thought it would be a great idea to promote the Armed Forces Foundation, which she oversees.

After getting permission from writer and actor Will Ferrell and Sony Pictures, the Talladega Nights paint scheme was finalized.

Fans that tuned into the #51 car audio during the race also got to relive events from the iconic movie. Busch was referred to as ‘Rick Bobby’, his crew chief as ‘Lucius Washington’, and his girlfriend as ‘Carley’.

There were several “shake and bakes” circulating on race day and Busch’s passenger-side stuffed cougar made for an epic ‘Dega race! 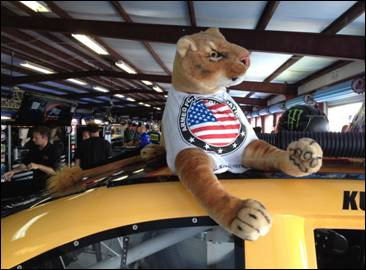 You can catch the video here:

Despite having the funniest scheme on the track, Busch had an unfortunate wreck (though not as classic as Ricky Bobby’s), and completed the race 20th, while younger brother Kyle got the last laugh with an impressive second place finish.

You can catch Busch and the rest of the NASCAR drivers this Saturday at 6:30pm on FOX as they go racing under the lights at the Too Tough to Tame track of Darlington.

7 Inspiring Athletes Who Went From Rags to Riches