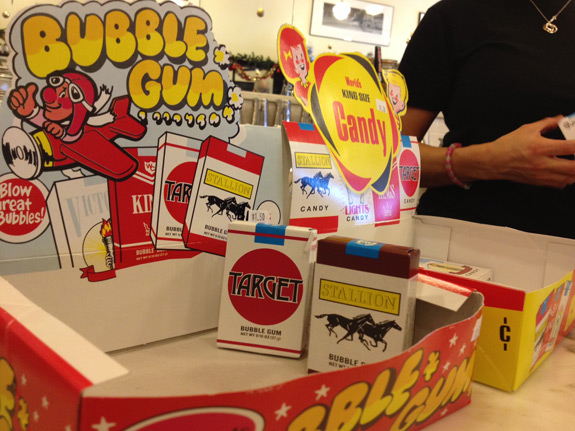 Last week, a St. Paul city inspector pulled the candy cigarettes, Big League Chew, and bubble gum cigars (the ones people buy when someone has a baby) off the shelves, warning staff that those items couldn’t be sold within city limits.

What’s the reason behind this, you ask? Robert Humphrey, spokesperson for the St. Paul Department of Safety and Inspection, says a resident reported the sale of the candy cigarettes on December 13th.

Apparently, there’s been a ban on tobacco-themed candy in place since April 2009, when The Ramsey Tobacco Coalition (a program of the Association of Non-Smokers) went before the council with a group of high school students who said “research shows that candy cigarettes leads to smoking.”

With such a compelling argument, the council unanimously approved the ordinance.

I had candy cigarettes and Big League Chew as a kid, how come I don’t smoke or chew today? Before you know it, they’ll ban those mini pretzel sticks, because everyone used to pretend to smoke them too.

The Harlem Shake: Postmortem Of A Video Craze

Man Sets Up His Own Hammock On BART Subway!