To celebrate his victory at the 1996 Brickyard 400, Dale Jarrett, crew chief Todd Parrott and the rest of the #88 Robert Yates Racing team kissed the famed row of bricks at the start/finish line of Indianapolis Motor Speedway, starting the tradition.

If you had the opportunity, which would you rather kiss:

Kissing the bricks at Indianapolis Motor Speedway clearly tops the list of greatest NASCAR traditions – But it’s not the only ritual that this sport has to offer.

Check out our list of the Top 10 NASCAR Traditions below: 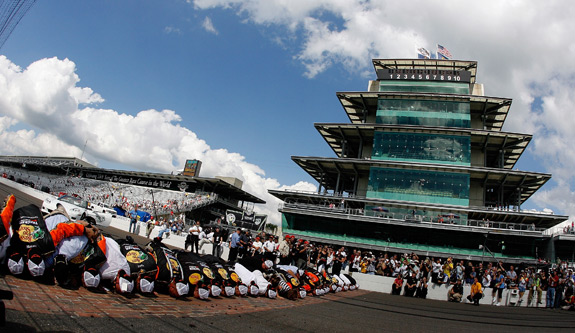 1. Kissing the Bricks at Indy

Dating back to 1909, the Indianapolis Motor Speedway was constructed in a span of 63 days by laying 3.2 million bricks, each weighing 9.5 lbs., to the 2.5 mile track surface. Due to early safety issues, the track removed all bricks and repaved the distance with asphalt, but one part of history was left intact: the “Yard of Bricks” at the start/finish line. It was 1996, however, that truly change it all. When racing legend Dale Jarrett won the Brickyard 400, his crew chief suggested they do something out of the ordinary: kiss the bricks. The track tradition quickly became a ritual and to date, the winning driver and team turn their hats backward, kneel, and kiss the historic bricks. 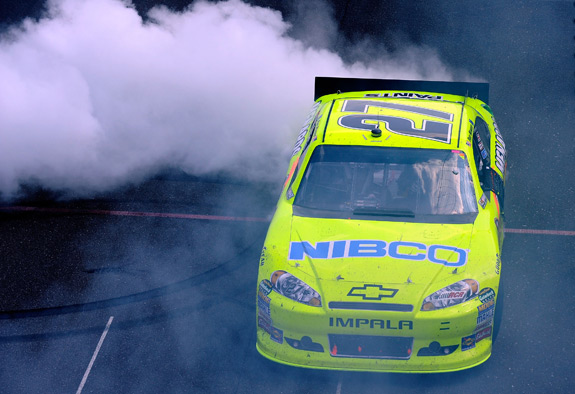 After crossing the finish line, the winning driver spins his tires, creating clouds of smoke and skid marks as a way of celebrating with fans before arriving in Victory Lane. Tracks such as Charlotte Motor Speedway even host an official burnout competition prior to the Sprint All-Star Race, showcasing one of NASCAR’s fan- favorite traditions. 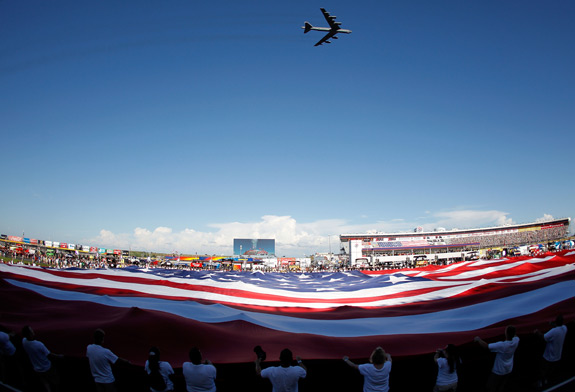 Patriotism is a true undertone in NASCAR for fans and drivers alike. Pre-race ceremonies at NASCAR events are some of the biggest and best in the sports world and although they differ from track-to-track, a few things will always be present: the American flag, the flyover of Air Force jets, and the national anthem. Military members are always in attendance at NASCAR races and find special recognition at all events. 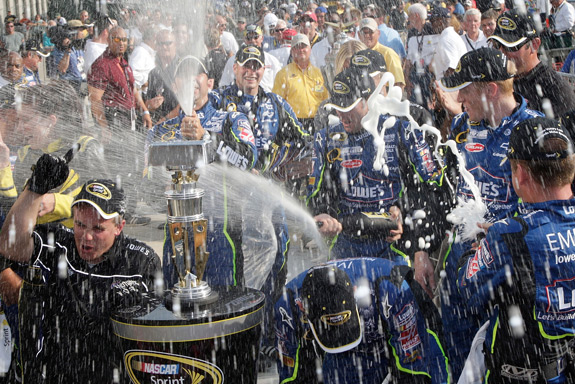 After the checkered flag waves, the winning driver pulls the car into Victory Lane for a celebration packed full with crew members, team owners, sponsors, teammates, and a lot of media. One of the most well-known traditions in NASCAR, Victory Lane never stays dry. Literally. The driver and team members soak everyone (and everything) with multiple bottles of champagnes and pile together for hundreds of photos including the “hat dance”, which involves every team member switching hats for sponsor recognition photos. 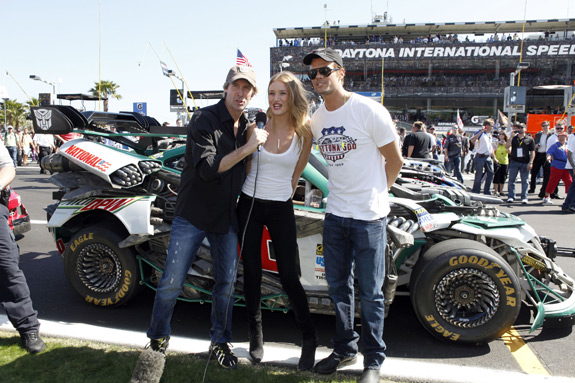 The most famous words in racing, “Gentlemen, start your engines” are typically announced following pre-race ceremonies by a celebrity, spokesperson, or lucky fan attending the race. The starting command has been given by notable people such as Adam Sandler, Peyton Manning, and Kate Upton. Due to an influx of women competing in the motorsports world, the phrase “Drivers, start your engines” has been utilized in recent years. 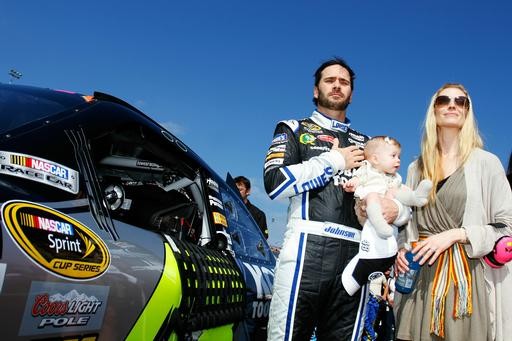 NASCAR is one of the few professional sports that begin with public prayer. In the “calm before the storm” moment, the pre-race grid powerfully speaks for itself: families gathered by their loved ones, every head bowed, and so silent, you could hear a pin drop. 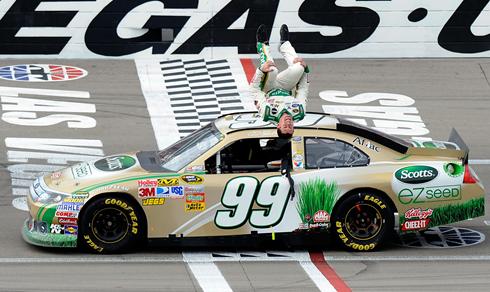 After claiming victory, the winning driver grabs the checkered flag, waving it from the window as he or she takes a final victory lap before doing a smoke-filled burnout. Some drivers have a special victory lap tradition, such as Carl Edwards and his classic back flip dismount from the car window. 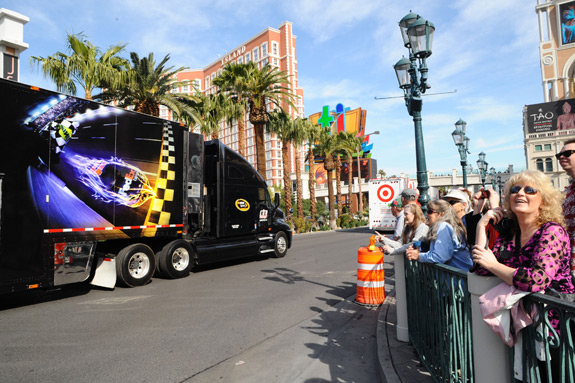 The NASCAR haulers make the sport possible, transporting all equipment, including two race cars in each truck, across country thirty-six weeks of the year. But before unloading in the infield, the haulers gather to form a parade into the track. The fan favorite? When NASCAR takes over the glamorous Las Vegas Boulevard for the most spectacular hauler parade on the circuit. 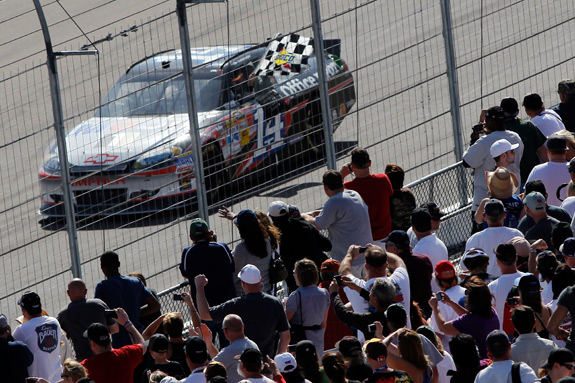 Many drivers complete a Polish victory lap to honor the late-NASCAR driver Alan Kulwicki that made the clockwise victory lap famous following his win at Phoenix in 1988. The tradition has been honored by numerous NASCAR drivers including the late Dale Earnhardt, Rusty Wallace, Michael Waltrip, and Tony Stewart. 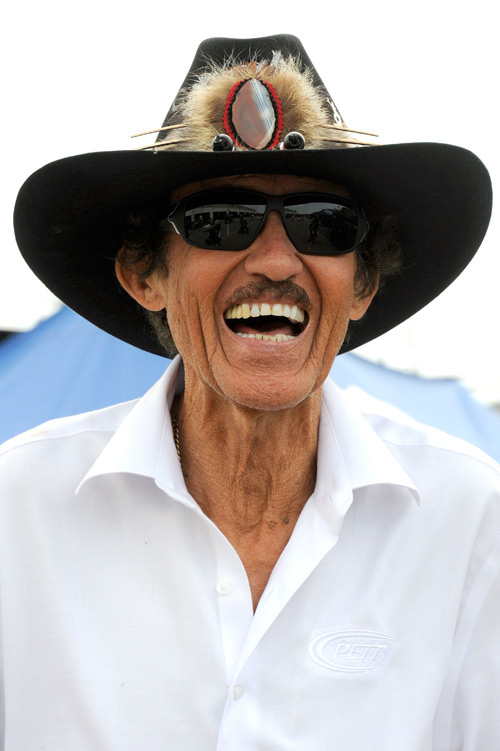 The most recognizable trademark in NASCAR belongs to the one and only Richard Petty, who has 200 wins, including seven Sprint Cup championships, under his reign. Known as “The King”, Petty is easy to spot with his feathered cowboy hat, sunglasses, and bright smile. Retiring from the driver’s seat 20 years ago, his signature look, combined with an impressive track record, is an everlasting tradition in the sport.

Penn State: This Is Not Collateral Damage, It’s Just Damage!