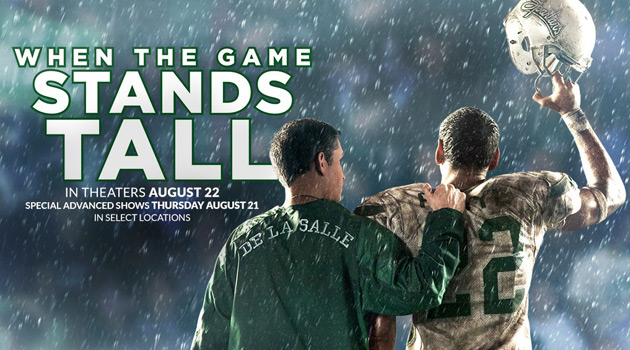 Joining the ranks will be the latest gridiron flick, When the Game Stands Tall – a 155-minute ride with great acting from star Jim Caviezel (mostly remembered for his role as Jesus in Passion of the Christ), as well as a number of strong supporting roles from the likes of Laura Dean, Alexander Ludwig and Michael Chiklas.

The movie is based on the 2003 book from Neil Hayes, and incorporates many of the true stories from the amazing 151 game winning streak for De La Salle high school in Concord, CA that went from 1992 to 2004. The streak garnered national attention, and Caviezel plays the role of head coach Bob Ladoucuer, who seems to handle the pressure of coaching a team that just can’t be beat, but also delivers a number of life lessons to his players, making them realize that there are a lot more important things than winning a high school football game.

Ladoucuer has a huge setback, suffering a seizure that lands him in the hospital, and takes him away from the football field for the spring of 2004 into the summer. The team must overcome the tragedy of losing one of their own, as just graduated team leader T.K. Kelly (played well by Stephan James), is gunned down at a party sitting in his car waiting for a friend to come down to give him a ride home. Recovering from his own setback, Ladoucuer recovers and gets back to coaching, helping a new set to seniors take the field for the 2004 campaign.

The season doesn’t deliver right away, as the Spartans lose their opening day matchup to end their 151-game winning streak. With most of the players in tears, Caviezel reminds them of their character as men, and that they can’t let a loss define them. After another loss, the team regroups after a visit to a rehab facility for war vets. With most missing limbs and sharing stories of war time, the team gets inspired and quickly start to get back to the basics of ‘team first’ and putting one another ahead of self.

Caviezel’s acting is a highlight, and the overtones of the movie delivers, making you walk out of the theater ready for another great high school season on the gridiron, and ready to strap you helmet and put on the shoulder pads for a movie that should be mentioned with the great high school football movies ever made.

Related Topics:ReviewWhen the Game Stands Tall
Up Next

Win A Copy Of ‘The Walking Dead: The Complete Fourth Season’ on Blu-Ray