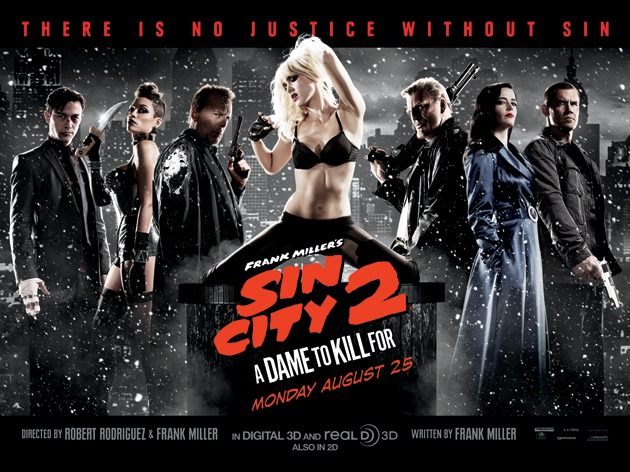 When Sin City first hit our screens back in 2005, it managed to surprise and delight. The novel’s writer teamed up with movie legend Quentin Tarantino to produce a graphic crime thriller that would become a classic.

Fast forward nine years and the follow-up is finally here. Based on the second book in the Sin City series, it features more of the same. So, if you loved the first instalment, A Dame to Kill For absolutely must be on your to see list this month.

Released just over a week ago on August 22nd, Sin City 2: A Dame to Kill For is directed by the same team as the original, Frank Miller and Robert Rodriguez. It manages to play the role of prequel and sequel all at once, as there are four intersecting stories from both before and after the original.

Sin City 2 definitely manages to exceed the original in just about every way. There are more guns, more blood, more dramatics, and more Marv. Played by Mickey Rourke, Marv is the central figure in the film and is seen murdering frat boys in the first tale, Just Another Saturday Night.

Rourke is just one Hollywood name in the stellar cast, and he is backed up by Joseph Gordon-Levitt, who plays gambler Johnny in The Long, Bad Night; while Josh Brolin plays Dwight in A Dame to Kill For. The gorgeous Jessica Alba returns as Nancy in Nancy’s Last Dance.

Perhaps the very best performance is Eva Green’s Ava. With those green eyes and red lips, she manages to send chills down your spine every time she appears on screen.

One significant difference between Sin City in 2005 and 2014 is a sense of sadness. While everyone knows that Sin City is a rotten place, it also exuded fun, but this time around the viewer really gets to see its true colors.

The Hollywood Reporter says that A Dame to Kill For is “an exercise in style” and that Eva Green makes it worth travelling the mean streets, while LA Weekly also raved about Green, saying she is “sexy, funny, dangerous and wild – everything the film needed to be”.

If you haven’t had chance to see it yet, book tickets for A Dame to Kill For at Cineworld and delve into another instalment of violent corruption.

Related Topics:ReviewSin City 2: A Dame to Kill For
Up Next

This Artist Makes Amazing Star Wars Sculptures Out Of Crayons