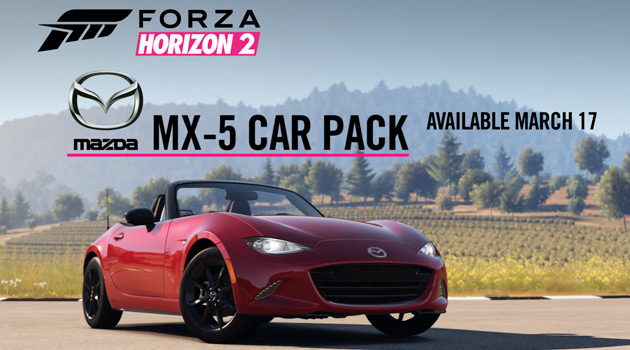 Mazda is giving Forza Horizon 2 players the exclusive opportunity to drive the all-new 2016 Mazda Miata on Xbox One months before the physical car goes on sale to the public. Beginning March 17th, the 2016 Mazda MX-5 Miata will make its digital debut as part of the upcoming Mazda MX-5 Car Pack! The new car pack DLC features four iconic Mazda MX-5 models and will be available as a free download on Forza Horizon 2 for Xbox One starting next week.

The Mazda MX-5 Car Pack features four amazing examples of the MX-5’s legacy of sporty style and thrilling driving: The car that reignited the world’s love of sports cars in the late 1980s, the 1990 Mazda MX-5 Miata, along with the 2005 Mazda Mazdaspeed MX-5, the 2010 Mazda MX-5 Super20 concept car, and the new 2016 Mazda MX-5. This pack covers more than 20 years of the MX-5’s legendary contributions to sports car history.

A sneak peek of the Forza Horizon 2

In addition to the launch of the free Mazda MX-5 Car Pack, Microsoft is kicking off an exciting Rivals contest for Forza Horizon 2 players on Xbox One. The Rivals contest, which begins on Tuesday, March 17 and ends on Thursday, April 30, will give Forza Horizon 2 players the opportunity to win a real-life 2016 Mazda MX-5. Once registered, players can set a time in the “Mazda MX-5 Challenge” Rivals event in Forza Horizon 2 for Xbox One and while anyone can set a time in this Rivals event, only registered players’ times will be eligible for prizes.

The Mazda MX-5 Car Pack will be making its worldwide debut this month at the Mazda booth (#513) at the SXSW Gaming Expo in Austin, TX. In addition to letting fans get their hands on the Mazda cars in Forza Horizon 2 for the first time via two interactive driving simulators pre-loaded with the Mazda MX-5 Car Pack, Mazda will also announce the winners of its recent Mazda Design Challenge contest on both Xbox One and Xbox 360.

Stay tuned to ForzaMotorsport.net and the Forza Hub app on Xbox One, as well as our Twitter and Facebook pages for more information on the Mazda MX-5 Car Pack.