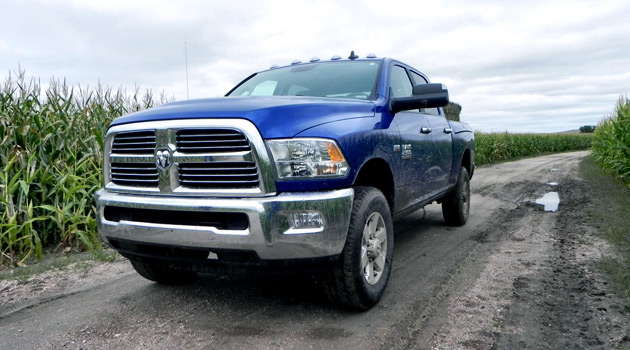 In the United States, the best-selling vehicles aren’t sedans, hybrids, or crossovers. They’re trucks. Pickup trucks. They’re in many ways the very symbol of American automotive: big and beefy with shiny grilles and huge tires. The 2014 Ram 2500 Big Horn is a perfect example of that. It’s not a half-ton, however, which are often “commuter” vehicles and “wannabe cowboy” machines, but an actual work truck.

Where I live, “big and beefy” is described simply as “corn fed,” so it seemed only right that a chunk of my test period in the truck should involve corn. Our test model was the most commonly-purchased Ram 2500 trim level variant: a Big Horn Crew Cab 4×4, this time with the new 6.4-liter gasoline-fed V8 engine and a six-speed transmission. The tow rating for this beast is 16,300 pounds. The 6.4L is an upgrade from the standard 5.7L V8 which has slightly less pulling and hauling capability, but is a good-sized entry-level for the truck. A turbocharged 6.7L V8 is also available before you dive into diesel fuel.

With all of this muscle ready to rock on an overcast day after some decent rainfall, we headed to the fields. Our plans were simple: fill up the back with stuff, drive around in the mud, and do the kinds of things an actual farmer on an actual farm actually does every day. Not b.s. “made for photo ops” stuff like you see in commercials, but real, everyday work. The plan was to get the truck to do most of the honest labor, leaving the humans to ride around in comfort and occasionally snap photos and maybe load something into the Ram 2500 with a tractor. If the truck was capable, this would be the case. If not, my review at this point would have a far different tone. 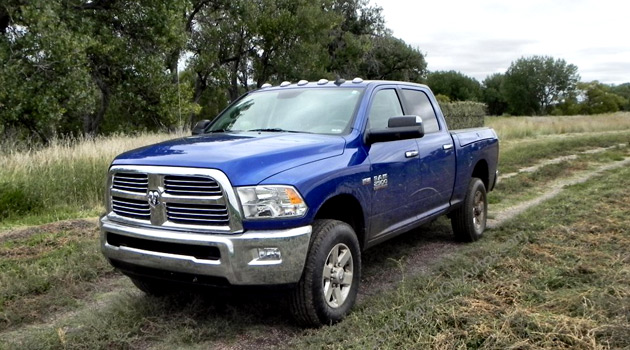 Before we get into action, though, some history from the Ram brand is important. Our Ram 2500 in the Big Horn package (called the Lone Star package in Texas because, well, it’s Texas) is the mid-level trim of the pickup truck that, in many ways, is responsible for the trucks we see commonly on the road today. Before the Dodge Ram appeared, pickup trucks were less beefy and more “pretty” because automakers believed that people wanted trucks that looked less intimidating and more like a car; as much as would be possible with a pickup that was still capable of getting the job done, that is. When the D150 became the Dodge Ram 1500 back in the 1990s, though, all of that changed thanks to a guy named Phillip E. Payne and, amazingly, the old Studebaker line of pickups from the 1950s he saw as inspiration.

Dodge went for a “semi-truck” appearance. It was a huge hit and today, all trucks have it. The giant grille, usually adorned with plenty of chrome work, fat bumper, the heavy fenders (most accentuated on the Ram brand), the high wheel clearance inside wide wells, and so forth were a long step away from the norm back in those days. Today, of course, all pickup trucks look this way. Interestingly, the Ram 2500 three-quarter-ton pickup truck’s claim to fame is not it’s bold exterior, but is instead its new spring-loaded rear end. For the first time ever, a heavy duty pickup is using coil springs on the rear axle rather than leaf springs.

That changes things a lot. Namely in comfort. With or without a load, the Ram 2500 rides smoothly and without most of the jarring that is common in leaf-loaded pickups. The significance of this change cannot be overstated. 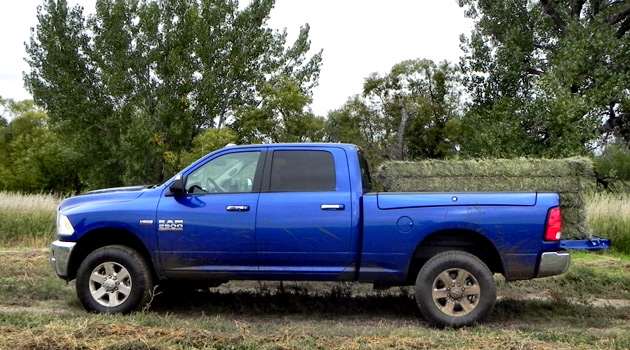 Now back to the mud and the corn. Our first task was to haul some hay around the corn fields to the far side of the property, roughly twenty acres away. No big deal. The bales were large, weighing about 750 pounds each, and the squared box of the Ram 2500’s Ram Box option was just about right to hold them. We gently dropped one in and it settled without incident. Perfect. So we got loaded (with hay, mind you) and headed off through the corn fields.

Since it had rained, there was a fair amount of mud on these dirt tracks. Amazingly, thanks largely to the weight in the back of the truck, I never shifted into four-wheel drive along the way. The high clearance and the weight pressing down on the rear tires meant that there was plenty of grip to keep going through mud, over hills, and on our way. It was nice to know that the 4WD option was there, just in case, but great to find out that it wasn’t needed thanks to the power and capability of the Ram 2500 under load.

We stopped wherever the road was mostly dry and got out to snap photos as our bales dropped and the truck became lighter and lighter. We swung in a long loop around the corn fields, stopping occasionally to shove something off or look at the view and listen to someone bitch about the weather delaying the feed corn harvest. Welcome to Nebraska. 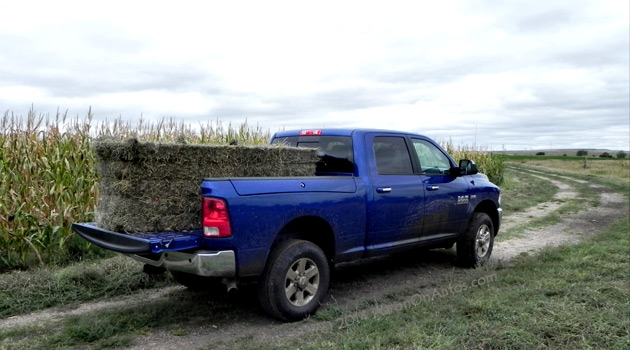 Eventually, we returned from whence we’d come. From there, we accomplished several other things, including partaking some hospitality from our hosts in the form of stories about life, the “good ol’ days,” and handshakes and smiles. They had slaughtered a pig the night before and put it in the smoker overnight. The smells of that BBQ drifted around the homestead mouth wateringly. Life is pretty good in these parts most of the time.

Later in the week, I drove the truck with friends up to a favorite fishing hole where the kids largely ignored the rods and reels and instead used the channels in the Ram 2500’s Ram Box caps as “lanes” to “race” worms. It wasn’t as bad as the box being more interesting than the $300 gift at Christmas, at least, so no worries.

After a fair amount of highway driving, some serious off-road to test the capability of the truck, and other accomplishments involving the types of things a heavy-duty truck living in Wyoming and western Nebraska is expected to be able to do regularly, I concluded that the Ram 2500 is an excellent truck. 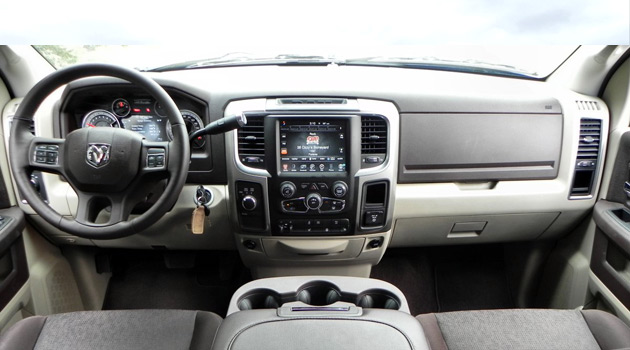 This truck’s been top-rated by many who’ve tested it, and now I can see why. Fuel economy was better than expected, capability was more than adequate, and the comfort level in a 3/4-ton pickup delivering for less than $50,000 was outstanding.

Truly a corn fed truck, the 2014 Ram 2500 in the Big Horn Package is everything you’ll need to get the job done and then go fishing to relax after the fact.