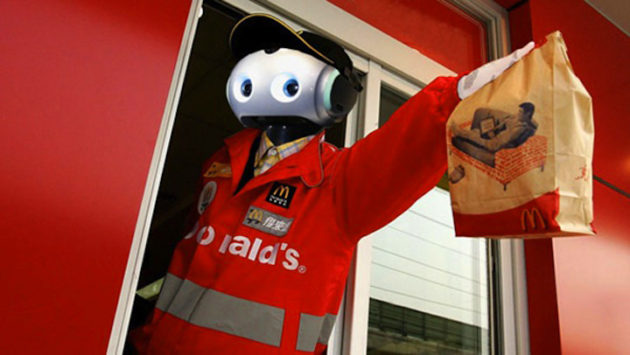 After seeing a decline in earnings for the first time in nine years, McDonald’s plans to do something no other store of its kind has ever done before; open a store run entirely by robots.

37-year-old Paul Horner, a spokesman for McDonald’s told reporters that because of the demand for a $15/hr minimum wage, the company has been playing with the idea of a restaurant run entirely by robots for years and believes their “McRobots” are the answer.

These robots work “50 times faster than human beings, they never make a mistake, they never take a break, and they eliminate the onerous burden of wage regulations that are putting businesses out of business faster than you can say ‘Minimum Wage.’ These things are great! They get their work done in a fast and orderly manner. And they don’t ask for cigarette breaks.”

Crazy, right? Now before you start yelling “They took our jobs!”, keep in mind that this “story” was posted on NewsExaminer, a parody site, and that it’s completely made up. I thought it was fairly obvious given some of the quotes in the piece, but others were adamant that it was true until Snopes confirmed that it was fake.

But that hasn’t stopped thousands of dopes from sharing the post on Facebook and expressing their outrage with comments like “So, all those employees will be out of jobs?! Way to go McDonald’s. First is was heart attacks and now you’re causing mass unemployment!”

Considering that I ordered a McDouble for lunch today and instead received a Sausage McMuffin, I have to agree with the commenter that said “I, for one, welcome our new burger overlords.”