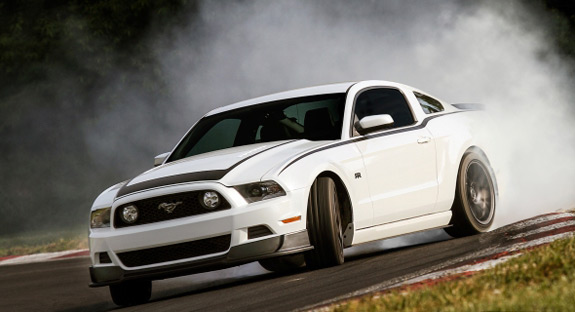 For the 2013 Mustang, RTR is stepping up its game in both appearance and performance, guaranteeing that RTR owners will get everything they desire out of their machine. See the official 2013 Mustang RTR promo video here:

RTR has landed on a very impressive suspension package utilizing Ford Racing adjustable shocks and springs, as well as 4-way adjustable RTR sway bars, RTR adjustable panhard bar, and RTR rear chassis brace — all of which utilize superior Whiteline bushings. This track-ready, street-friendly suspension package comes standard on a Spec 2 RTR or is available as an upgrade to all 2010 to 2013 Mustangs.

“We have spent a lot of time testing the new suspension package,” says 2010 Formula Drift Champion, Vaughn Gittin Jr. “I worked alongside very experienced suspension engineers and other pro drivers to deliver our goal; a very well-balanced car that offers RTR owners the ability to adjust the suspension to suit their driving style without sacrificing ride quality. Without question it is one the most impressive handling and fun-to-drive Mustangs out there.”

A suspension set-up book will be included in the Spec 2 RTR to give the owner suggested combinations of chassis settings to match his or her interest — whether it is drifting, road racing, drag racing, long hauls, or just everyday cruising. Engine horsepower and torque gets an impressive boost of 25hp and 60ft lbs of torque at 1500 rpm’s by way of a Ford Racing Tune, K&N Air Filter, and RTR axle back exhaust system for the Spec 2.

RTR has teamed up with Magnaflow Performance Exhaust to create a unique sounding exhaust system. This system successfully changed the “robotic” exhaust note of the 5.0 and contributed to a 9 horsepower gain on the dyno compared to the stock mufflers. RTR has also opted to change it up by using an innovative black ceramic coating on the mufflers that creates a high temperature thermal barrier, as well as adds to the aggressive look of the RTR. Another first in the Mustang market.

“I couldn’t be any more excited with the traction and reception of RTR since its introduction just two short years ago,” says Vaughn. “We will continue to push the envelope and give our customers a fun, aggressive-looking car to drive and a family that they are excited to be a part of well into the future. We are just getting the RTR party started!”

The all-new 2013 Mustang RTR will be offered in the following packages:

Currently RTR is finalizing development of a “track slayer” package for release in August 2012 that will replace the panhard bar with a track-proven Watts Link as well as a few other suspension components to take the RTR’s handling to the next level for those wanting a bit more out on the track.

The Mustang RTR is available only at select premium Ford Dealers world-wide as well as a few certified installation facilities around the USA. Check out MustangRTR.com to find your local dealer.