I just picked up an iPhone 3Gs on Friday for CHEAP. I won’t tell you how much I paid, you’d probably be mad if you were one of those folk that ran right out and got yours day one. I must say the experience I’m having with it is not what I had envisioned. 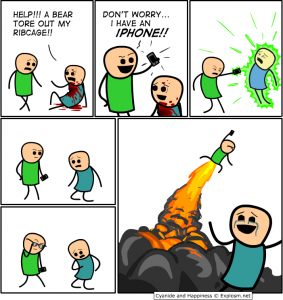 Let me start off by saying, had I gone ahead and “jailbroken”? err “jailbroked”? the device when I got it, I might be singing a different tune. I shouldn’t have to go through all that however. Coming from a WinMo6.x and then an Android1.5/2.1 phone, my main beef is that I do not have direct access to the memory storage on the iPhone. I’ve long since given up on iTunes as a media player for my computers for other reasons, so being forced to use it as THE SOLE means to add/remove apps on the iPhone makes me cringe. I’ve recently been told by an iFriend (friend with an iPhone/iPad) of other options to sync media(music,video,podcasts).

I do not like the way iTunes stores/organizes my media, so I don’t use it for playback at all. When setting up what to sync to my phone, I noticed that the options are extremely limited and are not the same across all media types. What I want is to be able to select what to sync by directory. It appears you only get that option for pictures. Again, I could be using some other program to sync media, but jumping back and forth is not the move.

What I DO like is the way you can setup your apps in iTunes the way you want them to appear on the phone screens. The other reason stayed away from the iPhone(and phones like it) so long is because there’s no physical keyboard. Having actually used it for a few hours, I can say that going forward I won’t worry too much about not having a physical keyboard anymore. In case I REALLY need to use one, I have this handy little number:

yeah it's cumbersome to carry this AND a phone, so what?

While the masses may love the jes…err iPhone (Apple sales figures as evidence), I do not. I will use this gadget until my contract runs out next March and get the new hotness, unless I get totally frustrated with some feature/service. At which point I will be selling it to the highest bidder.

About Ready To Give My Business To Apple