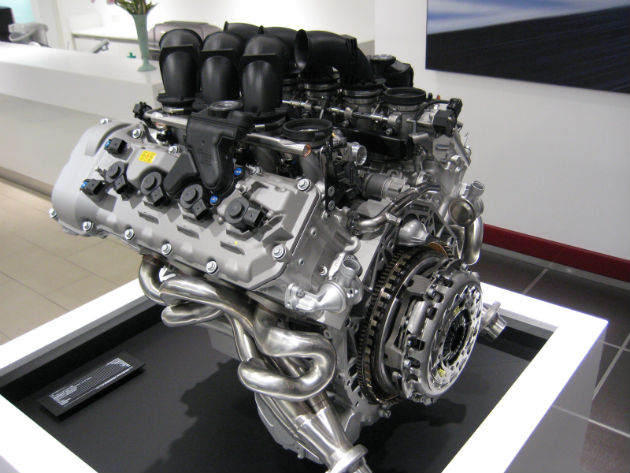 Engines are downsizing for efficiency, and while this downsizing isn’t necessarily hurting performance or power, vehicles are loosing their V8 growl. Many Ford F-150 buyers are opting for turbocharged V6s over big V8s. Range Rover, Audi, and Mercedes have all announced plans to replace large displacement V8s with turbocharged V6’s. Even Formula 1 is making the swich from V8’s to V6’s.

Yet despite all this downsizing, performance is generally comparable. What’s more, fuel economy is improved, and many vehicle owners enjoy the rush of a turbocharger spooling up during hard acceleration. Still, there’s an audible difference between a V8 and a V6, and the ground pounding sound of a throaty V8 is music to many ears. Losing this sound isn’t going to be an easy pill to swallow for most enthusiasts.

In order to preserve the distinctive V8 sound, many automakers are looking at systems that will use electronics and trickery. See what you think.

Save the Rowdy Exhaust Note

Most automakers have already started scaling down their engines, and those who haven’t are planning to do so. The days of the high displacement V8 motors are dwindling, as turbocharged engines with smaller displacement can match V8 performance.

The downsizing trend has really taken off in the last five years. Automakers from Ferrari to Ford are using engines with turbos to boost power without relying on the brute strength of a big V8. The trouble is, turbocharged V6 exhaust systems have a tone that’s relatively high-pitched and brash.

To combat the “high strung” exhaust sound of a performance V6, French auto-parts company Faurecia SA  has developed something called exhaust dynamic sound generation. The system is mounted to a car’s exhaust, listens to the exhaust note, and then activates a speaker that will output sound designed to supplement the exhaust system. While the software powering the system is complex, the basic components (microphone, speaker, and amplifier) are relatively inexpensive. The software can be programmed to reduce turbo whine and replace it with an “old school” muscle car V8 sound instead.

While the idea of mounting a speaker to an exhaust system to make it sound cool is sort of ridiculous, it’s not without precedent. Automakers have used vehicle stereo systems to “supplement” engine sounds heard inside the interior for years.

EV’s Can Sound Hardcore Too!

The issue with the EV sounds (or lack thereof) is actually a safety concern for automakers more than it is an image or attention grabbing thing. Silent vehicles approaching pedestrians, cyclist, and animals can mean trouble for everyone. The makers of the Nissan Leaf, Audi A3 E-tron hybrid, Daimler’s e-Smart car, and others actually offer buyers the option to customize the sound of their vehicle to make them sound more like a gasoline powered vehicle.

Another alternative made just for electric vehicles is software known as EVtones that allows drivers to change the tone of their EV via downloadable options. This technology can make a smart car sound like a Corvette, Porsche 911, or even a Harley Davidson — or heck, why not make it sound like a helicopter or Boeing 747 (yes, those are options too).

All of this certainly adds a new twist to the term “custom fabricated exhaust”, doesn’t it? Like or not, these kinds of options are probably the only way your new car is going to sound aggressive in the upcoming years..

The 2014 Scion tC Is A Small, Inexpensive Speedster