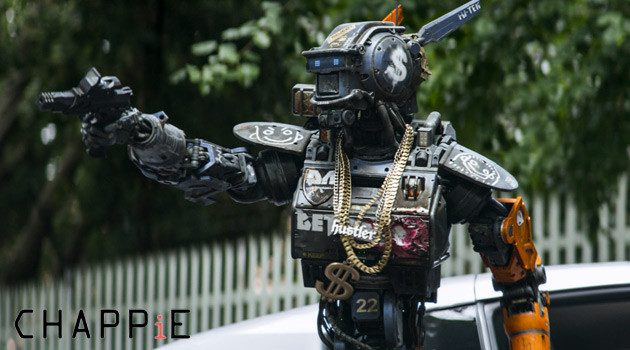 In 2009, at the tail end of a particularly mediocre summer, the world was treated to one of the most innovative films of the decade. This little $30 million sci-fi flick, by the name of District 9, combined some of the richest Alien mythology ever put on screen with thoughtful social commentary on the horrors of Apartheid, and it’s director, Neill Blomkamp, was lauded as the next Ridley Scott. Six years, and one somewhat disappointing (but still enjoyable if you ask me) follow up by the name of Elysium later, and we find ourselves at Chappie, Blomkamp’s final training run before he takes on something bigger with the iconic Alien franchise.

Chappie takes place in around 2020 in a South Africa (what a surprise…) where some of the police force has been replaced with droids created by Deon Wilson (Dev Patel), with a fair amount of success. However, Deon has bigger plans in mind, as he’s created the first fully functioning program for artificial intelligence, but unfortunately, his fickle boss (Sigourney Weaver) won’t give him anything to test it on. Taking matters into his own hands, he steals a partially destroyed droid, but as he’s on his way to test it, he’s kidnapped by three gangsters. These guys (two of which are played by and share the same names as Ninja and Yolandi from the rap duo Die Antwoord) need ten million dollars before an evil mob boss kills them, and they think that the childlike Chappie (Sharlto Copley), the being that Deon ultimately creates, just might be the thing to help them pull of the perfect heist.

Chappie certainly isn’t mining anything particularly new conceptually, as the whole childlike robot growing into itself trope has been mauled over time and time again. However, Blomkamp seems very aware of this, and seems determined to take Chappie in thoughtful and original directions throughout. This is his somber, darkly humorous, hard-R version of a fairy tale, and as such it really does work.

It certainly helps that Chappie is such a fascinating character, a childlike mind constantly being ripped between different ideologies. Deon wants him to engage his creativity, Yolandi wants him to learn slowly, and Ninja wants him to become tough and ruthless, and as an impressionable baby he is constantly trying to adapt to each person, regardless of how smart he ends up becoming. Watching this transformation and conflict is all the more interesting due to Copley’s absolutely wonderful performance, where he not only does brilliant work establishing Chappie’s movement, but by also melding innocence with intelligence.

To my utter surprise, the supporting cast is also very strong. I normally find Dev Patel as bland as a bunch of rocks, but here he gives a rich and soulful turn as a man who just wants his creation to be a good man/robot, and will stop at nothing to engage Chappie’s morality. Also, while there was a great deal of well founded skepticism in casting Die Antwoord, these two actually ended up being up to the challenge.

Now don’t get me wrong, they’re not Shakespearian level or anything, but they fit the roles they’re given, and make the best of it. Ninja provides some of the film’s biggest laughs with his utter hotheadedness, while Yolandi makes for a very atypical mother figure indeed. They actually seem like real south African gangsters, and not hired actors, which aids authenticity. Hugh Jackman also appears as the film’s villain, who wants to get his own police robot off the ground by any means necessary, and while it’s a bit of a thin character, he infuses it with the same passion one would expect from him. The only one who is wasted is Weaver, who has such a small and ultimately insignificant role it’s a wonder they even cast her in the first place. Whatever gets her back into space i suppose…

Where Chappie starts to falter a bit is in it’s action sequences. Typical of Blomkamp, they’re brutal and well staged, but equally typical of him, they’re also a bit over stylized for the tone this film is going for. This comes out most in his overuse of slow motion shots, which I suppose is there to highlight the brutality of violence, but because it’s used so often in other places that are just silly, it comes off as though he’s fetishising the violence a little bit, taking us out of the immediacy of everything and reminding us that we are in a movie. It ultimately undercuts the action sequences that do feel quick and powerful, and makes the whole affair feel a little overcooked in this respect.

Chappie has been met with a brutally negative reception, with people comparing Blomkamp to the likes M. Night Shyamalan and quite frankly that is simply too harsh for what is such a shot of originality, humor, and pathos in the sci-fi genre. Sure, he does ape a couple of the aesthetic choices he has made before, but he’s told an entirely different story. Any movie that has the balls to deal with the corruption of innocence in such a visceral and emotional way is pretty damn good in my book, and as far as I’m concerned, Blomkamp and Copley could make fifty more movies together and I would see each and every one of them.