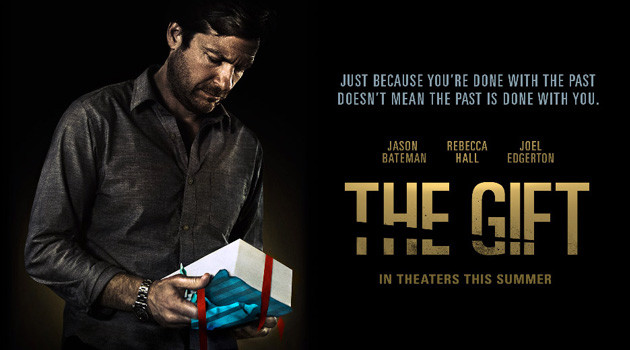 One genre that hasn’t seen a great deal of innovation in a while is the domestic thriller. We’re certainly a long way from the sexy, intriguing days of Fatal Attraction, which such dreck as Obsessed and The Boy Next Door quietly walking out of the same back-door they came in through. In fact, it seems that whenever the plot of a film revolves around a stalker invading a marriage, we movie fans should just look the other way. Or should we? Long-time character actor Joel Edgerton hopes to change the tide with his low budget directorial debut, The Gift. This movie certainly has the potential to bring some freshness to the table, and that would be a very welcome present indeed.

The Gift begins with Simon Callen (Jason Bateman) and his wife Robyn (Rebecca Hall) moving into the cozy suburban neighborhood around where Simon grew up. They’re hoping to get a fresh start here, as they’ve had a bit of trauma in their marriage already. Unfortunately, fate has other plans as Gordo Moseley (Joel Edgerton), a socially-awkward man Simon knew in high school approaches them in a store, and begins to take an extreme interest in the couple. As Simon becomes distinctly uncomfortable with Gordo’s afternoon gift-leaving visits, he somewhat aggressively cuts ties with the strange man. However, that’s not enough for Gordo, who as it turns out has a rather traumatic past that involves Simon directly, leaving Robyn to wonder who the man she married actually is.

The movie establishes itself as a different breed of thriller than what audiences have grown used to in recent years. While there is a great deal of unnerving stuff going on here, none of it is presented in a conventional way. As a director, Joel Edgerton rarely pushes the film into violence, instead letting the suspense and rich character work drive the scares. Although this is only his very first feature, the actor shows rich skill behind the camera here. He relies heavily on visual cues and subtle hints to tell his story, never letting his screenplay feel over-written. We get a sense of who these people are simply by watching them be, and for these characters, that is all that we need.

The actors’ performances here are much richer than what we might normally find in this type of movie. Jason Bateman has always for the most part been a comedic performer who only occasionally gets to shine in something dramatic, but he relishes the opportunity here. Bateman employs all of his traditional mannerisms that are normally used to make him likable, and skews them in a slightly different manner to make us suspect him of something darker. He’s a guy with a great deal of cruelty under the surface, and he convincingly shows us that rage when it’s time. Hall ultimately ends up as the character with the most screen-time as she finds herself in deep turmoil over the actions of her husband, pitch perfectly portraying the internal conflicts she finds herself in. However, it is Edgerton himself who shines the most as the shy and creepily wounded Gordo. While he’s not on screen a great deal, he creates perhaps the most genuine character in the whole story. He’s not a two dimensional villain looking for revenge, but simply a hurt man who seems to genuinely want to reach resolution over the past to no avail. He’s a character who leaves a huge impression, particularly in how his psychological mind games ultimately play out.

There really is a whole lot of depth to The Gift, but some may be a little restless in the early going. Edgerton very deliberately paces his story, slowly doling out clues that will be paid off later, but as a result some of that carefulness may come across as a bit slow before things really get going. There’s nothing to worry about, as things really do go to a deeply interesting place, but it may take a bit more patience than the average horror movie to get there. It’s certainly worth it though, as the back half and climax have some of the most twisted storytelling beats seen in a movie in a while, and the film will certainly leave you re-examining it for hours after it finishes.

While The Gift never truly ascends into fantastic territory, it’s certainly one of the better thrillers to come about in quite some time. It’s not only a well performed and competently told story, but one that does not rely on the typical devices that so many movies of this type use to get a cheep reaction out of it’s audience. Edgerton opts to mess with your head over your heart, and if you’re willing to go through a bit of wrapping paper to get to what he has in store, you certainly won’t be returning it to him any time soon, In fact, consider this review my thank you note.