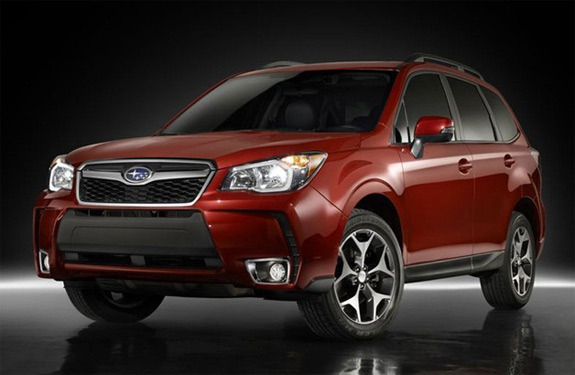 Subaru of America today released the first official photos of the all-new 2014 Forester, which will make its North American debut at the Los Angeles Auto Show. The new Forester combines a bolder profile than before while offering a roomier interior with virtually the same footprint as the previous model.

The fourth generation Forester will offer a new 2.0-liter direct-injection turbocharged BOXER engine producing 250 horsepower and 258 lb.-ft. or torque. The standard naturally aspirated 2.5-liter BOXER engine debuted in the outgoing Forester model. Fuel economy will be higher across the line with the debut of a new six-speed manual transmission and available Lineartronic continuously variable transmissions (CVT).

The all-new five-passenger 2014 Forester preserves the optimal blend of SUV capability and car-like ride and handling that have made the Forester one of the Subaru brand’s best-selling models for the past 15 years. Refined (or New) suspension system delivers agile handling and a highly compliant ride quality. Generous 8.7 inches ofground clearance enhances off-pavement driving capability.

I think Subura absolutely nailed it on styling, but I really wish they offered that 6-speed manual with the 2.0L Turbo engine. If they did, I might just trade in my WRX for one of these!

Related Topics:2014 Subaru ForesterSubaru
Up Next

How To Stop Mice From Attacking Your Car

How To Ready Yourself To Buy Your First Car