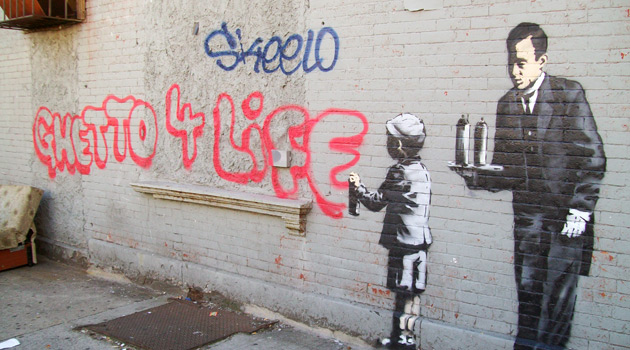 I normally loathe Halloween, but this year was different. After waking up at 6AM, hitting the “snooze” button over and over for about an hour, and finally getting up at 7AM, my morning routine began: Urinate, let dog outside, give dog a treat for going outside, microwave a cup of water for my morning cup of tea, Internet.

Now I’ll be the first to admit that my morning routine needs a change, especially since “Internet” has it’s own step-by-step process, but we’ll focus on one aspect of that though: My Google Alerts email.

Each and every morning, my Inbox contains one email from Google Alerts that alerts me of any new Banksy content. For the most part, the majority of it immediately gets trashed and not viewed, but every now and then something is worth a re-read and re-post.

About a month or so ago, these alerts heavily focused on the Chris Moukarbel directed Banksy Does New York HBO Documentary, which is set to air on November 17, 2015. If you haven’t heard about it, you can watch the trailer below:

HBO GO members received early access to this documentary on Halloween. Unfortunately, I don’t have HBO GO, as I cancelled my HBO subscription once Bored To Death was cancelled. But fortunately, I have some friends with HBO GO.

Chris Moukarbel’s documentary was well thought out and filmed. It was engaging and interesting, and I felt as if all over again I was waking up each morning awaiting the alerts in my Inbox from Banksy’s New York self-proclaimed residency, Better Out Than In. From start to finish, it was well thought out and filmed; after all, it’s not easy to mesh reality and the Internet, but Chris Moukarbel achieved a result that many fail at.

Everyone is a critic, masters of nothing, voicing their opinions as if they were words spoken from God directly, but this documentary took a neutral stance to Banksy and his works, as well as to the residency in general. It captured and communicated a story, and allowed others to voice their opinion, whether credible or not.

I could have done without majority of the commentators, especially the two YouTubers, because they’re not the real critics, just pawns in Banksy’s residency, which is the real work of art overall despite the additional 31 pieces.

At the end of the day, who am I to talk though, as I’m just a critic as well, but without a YouTube channel.

—
Mr. Francesco is a self-proclaimed art critic. He once thought about selling his car for a certified Banksy print, but decided not to and purchased some Banksy works on eBay instead. Mr. Francesco is not Banksy nor does he claim to be.