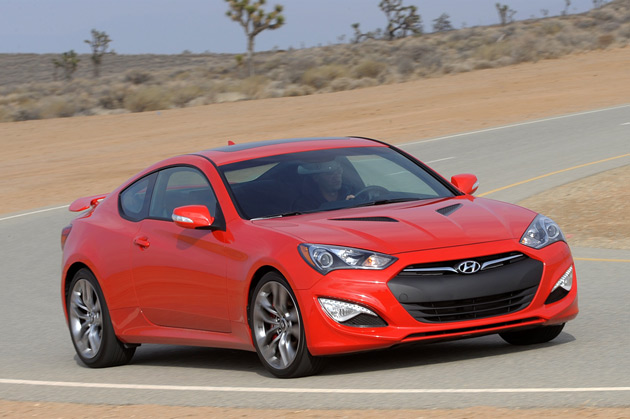 Regardless of which model you choose, the 2013 Genesis Sport Coupe is a lively, good-looking little car that delivers everything one could ask for in an affordably-priced sport coupe. But in its highest iteration, the 2013 Hyundai Genesis Sport Coupe 3.8 Track is a real powerhouse of fun. Just be sure to wear a seat belt, and have the credit card primed to buy new tires when you’re done.

The 2013 model year sees some improvements to the Genesis Coupe, including a styling refresh that brings a lot more pop for the buck. Most of the improvements are underneath the hood, with the vastly improved 3.8-liter V-6 now getting more horses out of the same block. This was achieved by high-pressure fuel injection spraying directly into the combustion chamber, which increases compression to 11.5:1 without raising operating temperatures thanks to the direct cooling effect of the fuel itself before ignition.

On premium gasoline, this means the 2013 Genesis Sport Coupe 3.8 Track pushes 348 horsepower and pulls 295 lb-ft of torque, all within about a thousand RPM of one another (max torque at 5300, max hp at 6300). On the track, having those numbers close means something. That’s less output than a Camaro or Mustang, but still respectable. Unlike the Camaro and Mustang, however, the Genesis Sport Coupe corners beautifully once you learn how to compensate for its slight understeer.

On the track, the 2013 Genesis Sport Coupe is a fun drive. The engine puts out a lot more power than one might expect, with a smooth, linear way of pushing forward without the noise and clank of some other powerplants. Keeping the revs high is key in the Genesis, at least on the track, as once they drop below 3500 or so, power fades and the car seems have a tough time picking it back up. A good driver won’t have a problem with this, since most track driving is about holding high revs and tight corners. 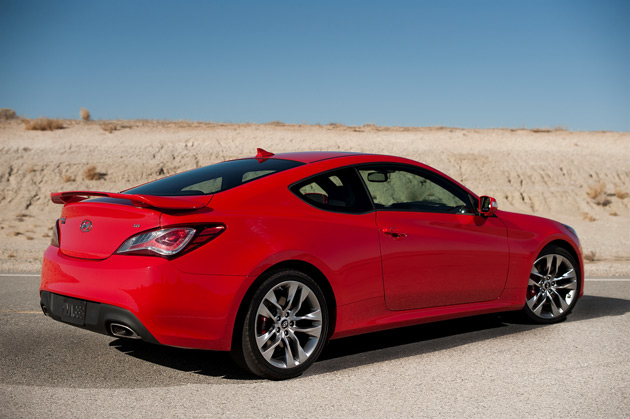 Cornering is another quirk in the Sport Coupe 3.8 Track. Hyundai hasn’t quite learned proper sport tuning, it seems, and it tends to understeer on the corners. Once you realize that, it’s easy to begin compensating for it with a little extra pressure on the wheel, allowing for very hard cornering compared to some of the Genesis’ counterparts like the Detroit muscle machines mentioned earlier. Compared to this Sport Coupe, those cars are boats. On the track, the Hyundai Genesis Sport Coupe 3.8 Track is on par with the Ford Focus ST but not quite as agile as the Subaru BRZ – both of which have smaller engines and are not otherwise comparable, of course.

The rest is all about shifting and control. Keeping the RPM higher than 4000, my runs around the GT-style track were phenomenally fun in the Genesis. Once I’d learned how the steering was best used and gotten used to the somewhat sloppy shift of the six-speed transmission (compared to other sport cars that day), I was able to hold more than 60 mph on even the tightest 90-degree corner and had a top speed of 128 mph on the quarter mile straightaway at the center of the track.

Definitely a fun car and at only about $33,000, the 2013 Hyundai Genesis Sport Coupe 3.8 Track is a well-priced sportster that will satisfy most summertime race track playboys. 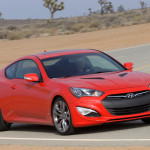 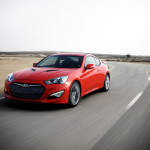 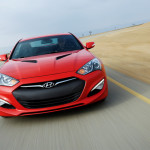 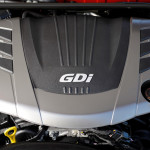 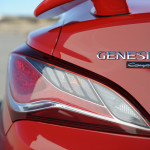 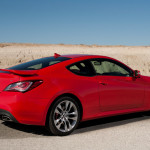 Ford Is The Official Vehicle Sponsor For ‘Course Of The Force’