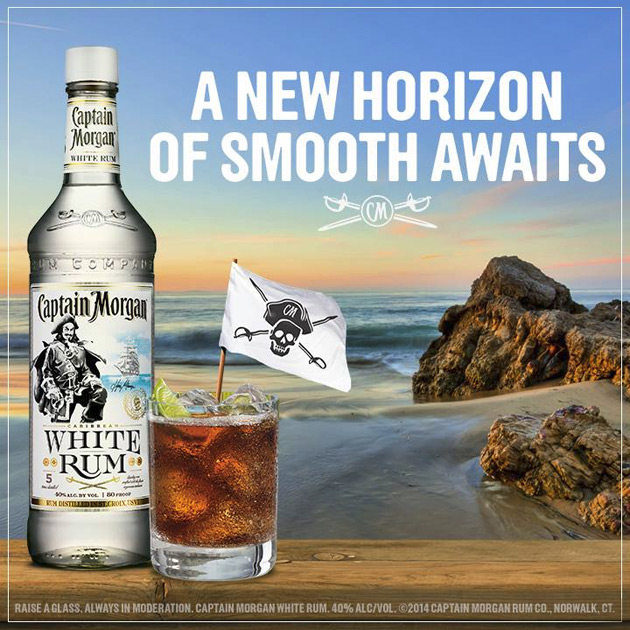 Mojitos, daiquiris and piña coladas are about to be overtaken as there’s a ‘New Captain’ taking over beaches and cocktails everywhere! Inspired by the real-life adventures and exploits of one of history’s most renowned privateers, CAPTAIN MORGAN White Rum, the newest addition to the rum brand’s portfolio, will take cues from its namesake with a nationwide release this month.

Inspired by the pristine waters of the Caribbean, Captain Morgan White Rum is five times distilled to ensure delicious taste, clean, slightly sweet and creamy with hints of lush fruit and green apple. It’s remarkably crisp, carries a smooth finish and is great for adult fans to enjoy responsibly year round.

“Captain Henry Morgan was a world-renowned privateer who paved the way for countless adventurers,” said Tom Herbst, Vice President of Marketing, Rums for Diageo North America. “It’s with that same spirit that we developed Captain Morgan White Rum, the first-ever white rum from a brand that people know and love. It’s a superior, quality rum that possesses a much smoother taste, and we aim to stake our claim in this category in an explosive way.”

At 80 proof (40% ABV), Captain Morgan White Rum will be available nationally beginning in early February for a suggested retail price of $15.99 for a 750mL bottle. It’s best enjoyed on the rocks, paired with cola or lemon-lime soda, or as the key ingredient in a number of Caribbean-inspired cocktail recipes.

Have you tried Captain Morgan White Rum yet? If so, what did you think of it?

Sponsored Video: Heineken Proves That Every Man Is Legendary