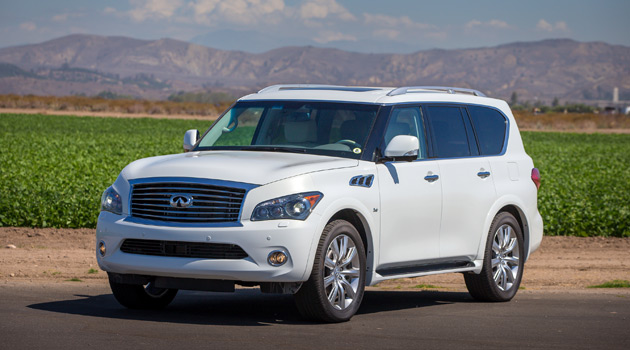 The big news right now is that Infiniti has launched a new model refresh for the QX80 SUV, but our test drive of the 2014 Infiniti QX80 showed that there isn’t much that the company could do to improve on this massive beast of luxury.

When I asked a Nissan representative how he would describe the QX80 in just a few words, he said “Big, Bold, and Boundless.” That’s an apt description. The 2014 QX80 features a massive 5.6-liter V8 engine and seven-speed automatic transmission that produces sports car-like speed. The chassis, despite this huge sport utility’s presence, is finely tuned for maneuverability and its ground clearance and off-road capability give it the ability to go off-road into situations you might not imagine an $80,000 (as we drove it) luxury machine getting into. Add in 8,500 pounds of towing and, well, you can paint your own picture. 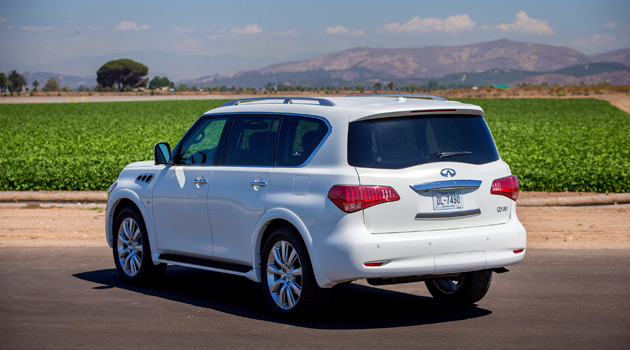 Yet with all of that backdrop, the Infiniti QX80 is still one thing at its core: a luxurious vehicle. As I’ve said before, luxury SUVs tend to be either built from the ground-up as luxury machines or they’re built as off-road machines with luxury included. Although it’s exceedingly capable off the pavement, the Infiniti is all luxury at heart.

The exterior is, of course, big and bold, as our friend at Nissan describes it. It has a look that is more intimidating and refined than many of its counterparts in the field. It carries itself very well. Yet once inside, that intimidation is gone and is replaced with fine leather, beautiful wood inlay, and soft touch surfaces that belie its beastly exterior. 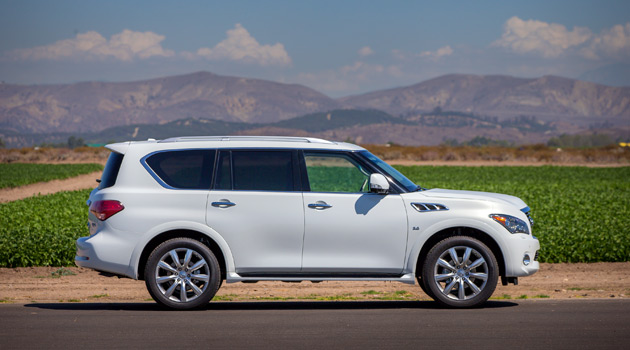 As should be expected in a luxury machine of this caliber, everything is automated. Truly automated, not just halfway as you may find in some sub-par offerings. Second and third row seating folds at the touch of a button, windows and the rear hatch open and close with nothing more than the press of a switch. Even parking, which can be a chore with a vehicle this large, is easy thanks to the AroundView monitor that shows you everything happening for 360-degrees around the QX80’s immediate surrounds and the very maneuverable chassis this SUV is built upon.

The interior of our test model included the optional Theater package with in-built headrest monitors for the kids in the second row, plugs for DVD and other players, an upgraded center stack with a DVD player built-in, wireless headphones, and a remote control. The TVs can play separately or in synch and the second row pilot seats (bench is optional) afford better comfort than many people’s living rooms might. 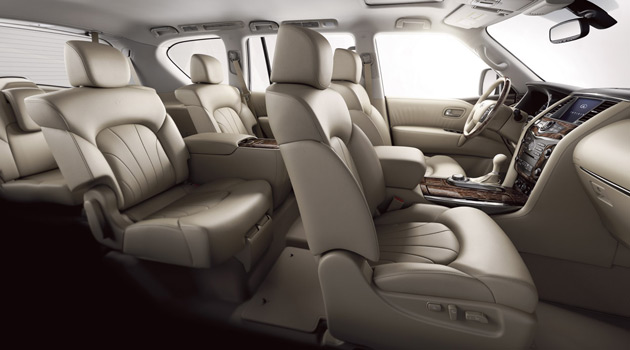 The third row is a good bet for small children and perhaps pre-teens, but is too small for most adults. It folds flat, though, allowing for a massive amount of cargo space. Climate controls finish off the interior excellence with vents in the floor and ceiling for all seating positions as well as controls at front and second row.

Out on the road, using the word “refined” is an understatement. The 2014 Infiniti QX80 drives better than many cars, with absolutely no road noise whatsoever. The quiet ride, smooth comfort of the suspension and our optional Deluxe Touring Package body roll control package made for a great experience on the highway. The big SUV’s agility and visibility made it easy in town and the massive V8 throttles up the muscle when you want to get there in a hurry. Our only complaint was that the fuel tank is relatively small, allowing for only about 250 miles per fill. 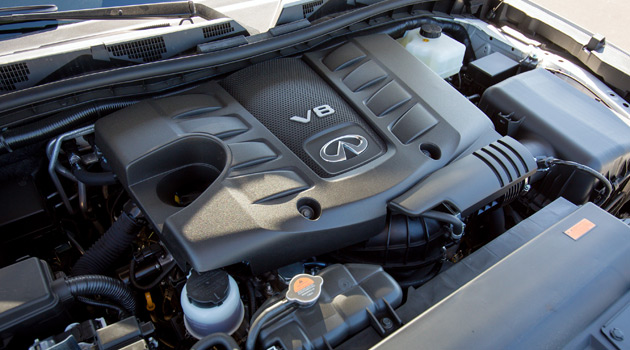 The new 2015 Infiniti QX80 Limited that debuted at New York is this beautiful 2014 QX80 taken to another level, adding even more interior upgrades to take it from high luxury to ultra-luxury. Other updates to the standard QX80 for 2015 will include some interior changes and an exterior refresh as the SUV becomes a better match to its Q50 sport sedan brother in the large car market.

If you aren’t willing to wait for the 2015 models to hit showrooms, you will not be disappointed with the 2014 Infiniti QX80.

Related Topics:2014 Infiniti QX80Infiniti
Up Next