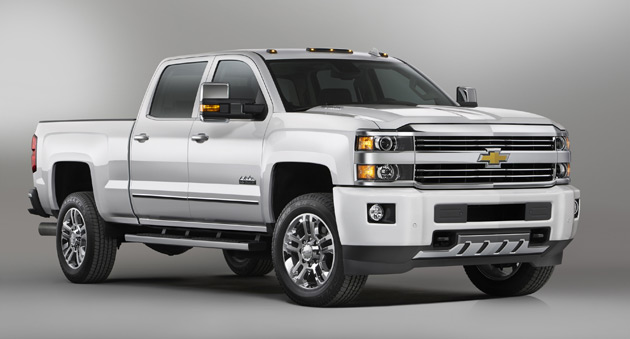 Chevrolet unveiled the new Silverado High Country line of heavy-duty pickup trucks at the Denver Auto Show’s press day, and we were there to see it. This amazing lineup of high-end pickup trucks competes with the 1794 package from Toyota (which you can read about here), the Ford King Ranch series, and the Ram Laramie package. Although the half-ton Silverado 1500 High Country debuted earlier this year, the majority of the buyers for this type of truck were waiting for the heavy-duty three quarter and one ton packages to unveil.

Our first impression when the cover came off was that the truck looks like a Chevy. Very much so. It’s big, blocky, and ready for action. Small differences and usability refinements then became apparent and once we were able to start climbing on, in, and around the truck, those updates for this High Country package became very apparent.

The first thing most will notice is that the High Country packaging for the heavy-duty trucks includes body-color bumpers and nameplates with the rocky mountains embossed with High Country on the tailgate, front fenders, and kick plates. These were readily apparent on the bright white paint of the show truck, which also served to showcase the chrome accents added for the package. Most of these are seen on the grille work, which is big, bold, and shiny. It also offsets the side mirrors, which are the new, up-level trailering mirrors Chevrolet has been offering with tow packages. Finally, the eye-grabbing chrome wheels on the High Country package are unique as well. 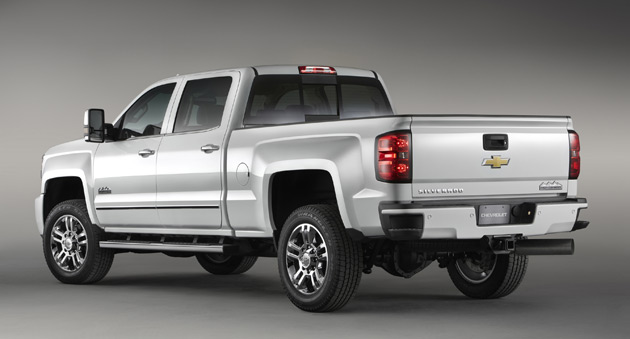 Opening the doors, the interior is an obvious upgrade. The saddle leather, upfit electronics, and ventilated seats denote its luxury trim level. Seating is comfortable and the new Silverado build means that the rear seat can actually accommodate three full-grown men without too much shuffling. The driver’s seat, of course, is where it’s at and everything is geared towards making that driver comfortable for the long haul. Although the leather isn’t as good-looking as that in the Ram or Toyota Cowboy Cadillacs, it gives the impression of being much more functional in terms of being able to take workday abuse.

The unveil was by Kyle Koop of General Motors, who is spearheading the marketing efforts for this new truck series. We spoke with him briefly about the new lineup and he pointed out that the aim for the High Country is functionality with comfort rather than looks for looking good’s sake. The market this truck primarily will sell towards are those who work with and in their trucks during long days of towing and hauling.

The base level High Country package in either of the Silverado HD models includes everything the person who tows loads for a living could want. Apart from the towing capability of the HD truck itself, the package includes the new towing mirrors mentioned earlier, which extend and adjust to accommodate even the largest trailers for maximum visibility. Towing controls, including trailer braking settings (if equipped) are easily reached from the driver’s position and the creature comforts of the interior are aimed towards the person who sits in the seating for the long haul. 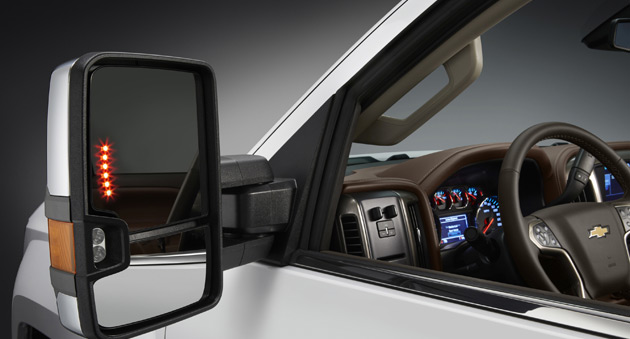 Other little touches include the CornerStep rear bumper fitting, making it easier to get into the bed, trailer lighting in the bed and rear, and six-inch tubular chrome steps to make getting in and out of the Silverado High Country easier.

Our time kicking the tires found that the 2015 Chevrolet Silverado 3500HD High Country is easy to get in and on, with steps and assists in just the right spots. It’s also very comfortable for the driver in terms of seating and how reachable controls are. The back seat in the full crew cab are far more comfortable than expected and storage is abundant throughout the cabin.

In short, we were very impressed with the High Country packaging and its aim for working owners rather than glorified Cadillac drivers. A great job all the way around for Chevrolet here.