In the history of portable gaming, there’s nothing bigger than the Nintendo Game Boy. The Game Boy started a revolution of gaming that survived many variations over the course of a decade. When it launched in late 1989, it competed against the Sega Game Gear and Atari Lynx. Remember those? Yeah, me neither! 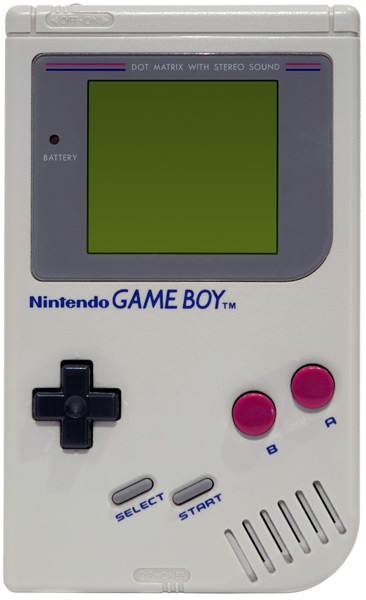 The Birth of Next Generation Console Gaming
The 1980s saw a competition in video gaming that was unprecedented. The Game Boy Console was launched as an 8-bit video game device that featured a lightweight frame and familiar Nintendo control buttons used on its cousin, the Nintendo Entertainment System. One of the most unique features that set this device apart from others, besides its form factor, was the ability to plug in an extension connector for team gaming. The console also became a next generation gaming device with small cartridges. Often these cartridges mirrored the popular games at the time on larger console systems. This prompted simultaneous playing for the NES as well as competition for North American, Japanese, and European titles.

Advanced Features and Public Reaction
The Nintendo Game Boy also featured an external rechargeable battery pack and a 3.5mm stereo headphone jack for added convenience. Initial reaction to the Game Boy took hold in similar fashion to the iPod. Although the Atari Lynx featured color graphics and networking abilities, the Game Boy was a more affordable option and featured more user-friendly controls. The rechargeable battery pack differentiated it from the market by making it truly a highly portable video gaming device, effectively targeting an expanded audience who often traveled.

The Game Boy became a device expanding its use of the accessory port by introducing the Game Boy Printer in 1998, which was a year of many changes for Nintendo. It functioned using thermal paper with adhesive backing and was able to print basic black-and-white images as well as photos from the Game Boy Camera. Game Boy also introduced Game Boy Color, which allowed players to play traditional Nintendo games in full hi-color. This allowed users to go backwards compatible and play their old favorites in full color.

The Enigma of the Game Boy
The Game Boy continued to evolve into the Game Boy Advance and Game Boy Advance SP in 2005. It utilized a flip-down top instead of the standard handheld device as seen before. Although the latest incarnation of Game Boy looks less like the original, it still contains many of the same features, such as battery life and use of ROM cartridges. It became a more portable device as well. Regardless of these changes, over the past decade the Nintendo Game Boy has created a market of simple design and innovation with compatible features for all versions.