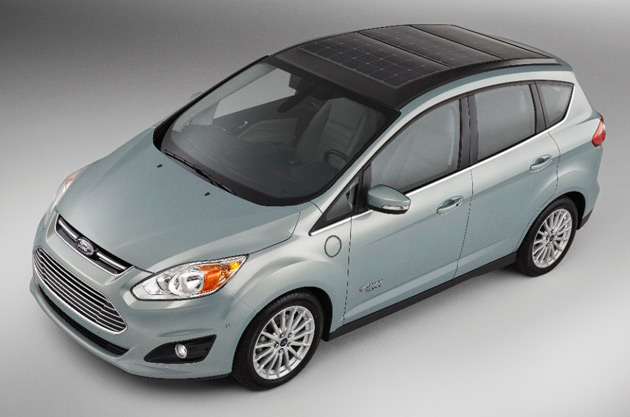 Ford has announced a new concept vehicle to be showcased at the 2014 International Consumer Electronics Show (CES) in Las Vegas next week. It’s a C-MAX Energi outfitted with a set of solar panels on the rooftop to go “off-grid.” It’s far from just another dreamy plug-in car with solar panels to add further to its green cred, however. It’s a glimpse at an evolving technology that could become a part of automotive future.

Throwing solar panels on a car just because the car happens to be electrified, ala the Prius Plug-in or the Fisker Karma, is nothing new. The trouble is, with the limited space, uncertain exposure angles, and other factors limiting photovoltaic options on a car’s roof, the idea has largely been more for public relations than for reality.

Solar powered cars are usually of the lightweight variety and are often shaped like manta rays with bicycle tires on them. These cars are capable of low highway speeds, sure, and can travel cross-country when the weather is good, but are extremely limited and well outside of the realm of the automotive market today.

Ford wants to change that, and the innovations shown in the C-MAX Solar Energi concept prove that it’s possible a solar car future that may be nearer than you think. 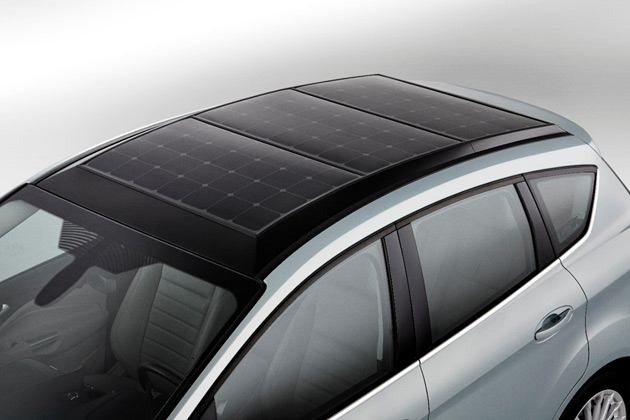 The C-MAX Solar Energi concept has what look like solar heating panels on its rooftop panels that are similar to those you see on some houses where solar energy is gathered to pre-heat water for household use. In a way, this is exactly what they are, but instead of hot water, they are generating electricity just as photovoltaic power panels do. The difference is in the way the panels have been built, which will explain why they are thicker and taller than ordinary PV panels. Think of them as a combination of a water heating panel and an electric one.

These panels are built to be solar concentrators, focusing sunlight on the photovoltaics underneath the panel’s top so that they are more efficient. The idea is to overcome the inherent limitation of angle of attack that a car’s rooftop possesses. Since you can’t always predict the position of the car when parked or on the move, since the rooftop can’t be tilted towards the sun dynamically as many solar panel systems are, and since you can’t always predict how effective the sunlight hitting the rooftop will be, Ford wanted to overcome those issues by simply changing how the sunlight is angled towards the PV once it does hit the roof.

What the “concentrator” on top of the car does is capture sunlight from all angles and focuses it as much as possible towards the optimum point for each solar cell on the photovoltaic panel beneath.

Ford says that this plus another low-cost concentrator can take a day’s worth of sunlight and deliver the same performance as a conventional plug-in C-MAX Energi without drawing power from the electric grid. Ford says this would reduce the C-MAX Energi’s annual greenhouse gas emissions by four metric tons.

The breakthrough comes from SunPower, a Ford partner, which provides high-efficiency PV cells for the concept car. Combined with tech from the Georgia Institute of Technology, the cells can power the car for a full day’s drive. The answer from Georgia Tech came in two parts.

First, the on-roof concentrator which angles light to maximize its input to the car. This stand-alone portion of the technology combines with the advanced solar cells to create the most power possible without something off-vehicle being added. It does not, however, provide enough to power the car entirely, but is a huge leap forward from current solar panel use in automotive.

The second part is a standing concentrator. Think of it as a solar panel charging station without the plugs or panels. Instead, it’s a sort of big magnifying glass based on the Fresnel lens, it actively track sunlight and aims it optimally towards the car’s panels. The innovation here is not the lens itself, which is pretty awesome anyway, but in the fact that it’s not a stand-alone panel system but rather a far cheaper concentrator for use when the car is parked underneath. It’s possible that this could be devolved into a portable system that could be easily stored and deployed from the car itself, in fact, but that is not something Ford has gotten into, preferring to look instead at the overall package as a two-part system that can work together or separately. 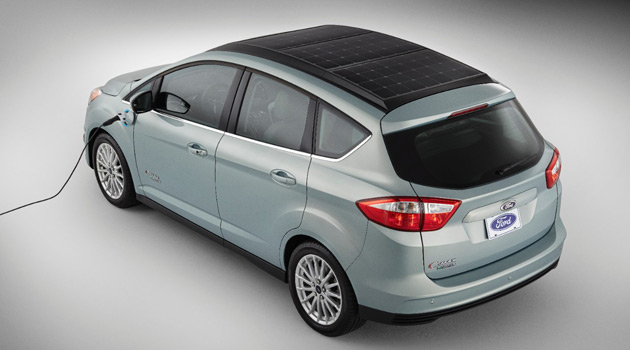 So imagine this perfect scenario: the C-MAX Solar Energi pulls into a parking spot in front of your home. It parks over the top of some solar panels embedded into the concrete below, onto which the solar concentrator has been beaming sunlight all afternoon to power your house or sell to the grid. Now that your car is there, it begins collecting the light instead, recharging its batteries. The car itself was charging while you parked at work, though not as efficiently as you don’t have a concentrator there (yet). Not only has your solar system been aiding your home energy use, but now it’s powering your car as well.

Ford estimates that as it is now, the C-MAX Solar Energi concept is capable of recharging itself to 8 kilowatts (roughly four hours of plug-in charging) in a day using this system. While not totally self-sufficient, it’s a big step towards that and a huge leap for solar-powered automotive.