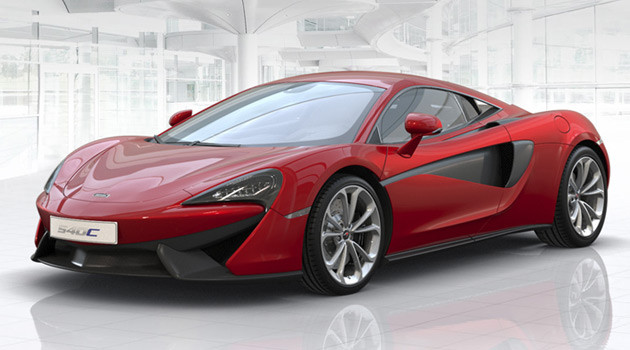 McLaren, known for its expensive luxury sports cars, revealed a new model last month that promises to be its most affordable supercar ever. The McLaren 540C, or the 540 Club, was put on display at the 2015 Shanghai Motor Show. Its unveiling followed just a few weeks after the much-anticipated 570S, the first model under the brand’s Sports Series, was revealed at the New York International Auto Show in April 2015.

The McLaren 540C is being marketed as the brand’s entry-level model and was built to be a comfortable ride minus, of course, some of the power of its more upscale siblings. With a starting price of around $165,000, it competes with the Porsche 911 Turbo and the Audi R8.

Classic McLaren body features include the ‘MonoCell’ chassis, which has been redesigned to enable drivers to get in and out without a hitch. The body also makes extensive use of aluminum, which significantly keep the car’s weight down to 2890lbs. It’s lighter than the 570S by 4.5 pounds, but you’ll hardly notice. It shares the same Brake Steer technology, seven-speed gearbox, and the simplified suspension with rear and front anti-rollbars with the 570S. The proprietary brake steer system gives the driver the ability to brake and inside rear wheel in corners, which can prove to be very helpful in handling.

The car also features a revised aero package, noticeable in the newly-redesigned aero blades placed just below the bumper out front. Add to that a new spoiler at the tail and also a new rear diffuser. The car’s alloy wheels are new as well, and are available in either stealth or silver finish.

As the entry-level model, the McLaren 540C has been designed with adaptive damping appropriate for daily road usage instead of heavy track duty. The dampers come with ‘softer’ settings: normal, track, and sport, leaving the driver to select which setting to use. Aside from engine power, the adaptive damping is really what sets the 540C apart from the 570S

One thing’s for sure, the McLaren 540C is an impressive car. It might well be the sort of dream car a young driver aspires to. But unless you posses Justin Bieber levels of cash or just won the lottery, the term “entry level” might seem a little misleading.

With the speed and specs of such a desirable vehicle it’s important to perfect the skills of the road – be they practical know-how of maneuverers or the vital rules of the road you pick up while studying for your driving test. Such a masterful vehicle requires mastery of the road. Combine the two and driving will never have felt such fun…

Related Topics:McLarenMcLaren 540C
Up Next

EA Announces The Return Of Need For Speed