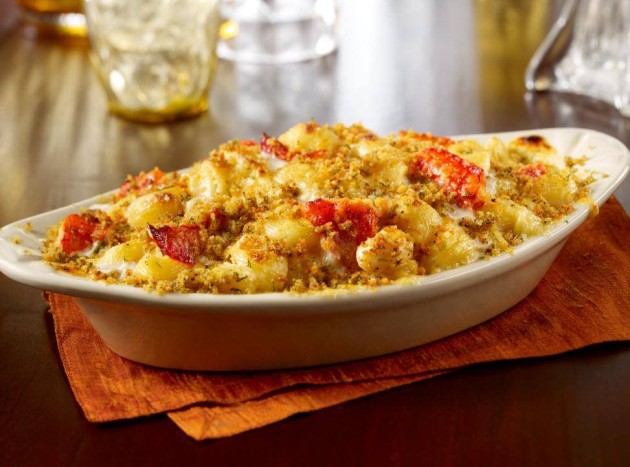 Over the weekend, we hit up Maggiano’s Little Italy for dinner because my wife didn’t feel like cooking. While I wasn’t really keen on the idea given that it was the week before Christmas and that the mall would be a mob scene, I gave in to keep her happy.

The Chef’s Features menu had a number of tasty dishes to choose from, and since I’m a sucker for lobster, I decided to give the Langostino Lobster Al Forno a try. And let me tell you, it was PHENOMINAL! The dish starts with artisan pasta and is then tossed with herb breadcrumbs, a white wine truffle cream sauce and Langostino Lobster.

It’s essentially a sophisticated Mac & Cheese for adults, and I was really happy that I ordered it. At $18.99, it’s a great value, especially considering the fact that it comes with an On The House Classic Pasta to take home as well. (Guess who’s having Baked Ziti tonight?)

My only complaint? There wasn’t nearly enough lobster in the dish. I asked our waiter, and he says they put about 3 oz. of lobster in there. Honestly, I ran out of lobster about halfway through the meal, and after that I was just eating a really rich macaroni and cheese. I wouldn’t have minded some extra breadcrumbs as well, as my dish looked nothing like their photo which you can see above.

Would I order it again? Absolutely! But here’s the catch – They’re only serving this dish through the end of the month, and there’s no telling if they plan on bringing it back. Here’s hoping that they get enough e-mails that they decide to make it a permanent menu item. Fingers crossed!

For dessert, we shared the Double Chocolate Brownie (since they got rid of Nonna’s Toasted Pound Cake for some reason), and it was pretty mind blowing. The brownies were fresh out of the oven, the strawberries and ice cream complimented it nicely, and the balsamic glaze was a nice touch. HIGHLY recommended!