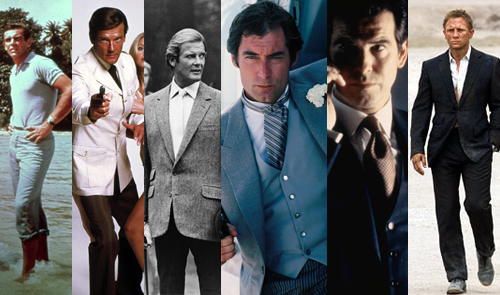 James Bond is the quintessential Englishman-come spy who represents a lifestyle envied by many men, not just in the UK, but across the globe.

James Bond has it all. A secret but enthralling career as a spy which sees him fighting the most sinister of villains, but always beats them hands-down thanks to the many gadgets and technologies available to him.

He is renowned for his impeccable taste in everything from clothes, cars, women and of course, his watches. Nothing he wears is average, but then James Bond is not an average character. He has access to the most cutting-edge of everything he needs, and people fall over themselves to dress him because of the status and publicity they will receive.

His suits of course are hand crafted at No. 6 Sackville Street, with tailors Jones, Chalk and Dawson; Meyer & Mortimer; Kathryn Sargent; Tom Brown and Brian Russell, and shirt-maker Sean O’Flynn.

Bonds love interests are considered “ubiquitous symbols of glamour and sophistication.” In the films they are known as Pussy Galore, Plenty O’Toole, Xenia Onatopp, or Holly Goodhead. In Hollywood, they would be known as the greatest collection of stunning, successful female actors of their time including Halle Berry, Sophie Marceau, Minnie Driver and Eva Green.

Of course, James Bond would not have a realistic chance at dating any of these girls if he were not polished from head-to-toe, including his must-have accessory, the watch. His good taste and sophistication means that a Swatch watch or a Casio watch would just not be appropriate. Therefore brands like Rolex, Breitling, Seiko and Omega adorn his wrist. The latest version of each of these brands is always made available to Bond and most likely worn by him, before being made available to anyone else.

Although 22 Bond movies have been made in total, the number of watches worn by Bond himself in these films, amounts to 50. Only Bond would wear more than one watch in one film. Brands like Rolex and Omega would only ever make several of their watches, available to Bond only, for one film only.

The list below depicts every single Bond film released, the release date and most importantly, every single watch brand showcased in each and every one of the films:

It was not always so easy for the Bond brand to be able to access these watches. For the first film, Dr No, Rolex refused to lend their watch to Bond. Therefore the actor who played Bond, Cubby Broccoli had to use his own a Rolex Submariner with a black crocodile strap. It was only when Bond proved to be successful among aspirational men that they realised the huge marketing potential by associating their brand with the Bond brand. Therefore once Rolex were on board, Omega, Heuer and Seiko, were quick to follow suit.

Bond was later give speciality watches from Q-Branch, which contained gadgets such as a powerful magnet, best used when he unzipped a dress or a wrist dart gun as seen in Octopussy.

There are now even websites fully dedicated to the ‘James Bond lifestyle,’ listing everything you could possibly wish to know about the man James Bond, and the brand. It illustrates his clothing, accessories, food and drinks etc. Each and every one of these items tells a riveting spy-tale and represents the journey Bond has followed over the years in his career and in his lifestyle. As the suits have got sharper, the watches have gotten more dashing and hidden more gadgets.

Among the many devices that the Bond watch contains includes the following:

The fashion and gadgets worn by James Bond, are as anticipated almost as much as his movies. With technology and the digital age moving so fast, it’s exciting to see what he will showcase in his next movie, in particular what watch he will wear and the tools that is will harness.

For more information about luxury watches, including many of those worn by James Bond, visit Watch Harbour.

Freelancers – To Serve, Protect.. and Steal