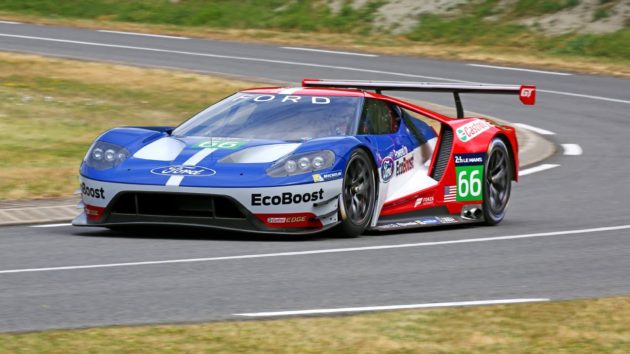 Ford said they would design and build a car to win the legendary 24 Hours of Le Mans. But could they do it in just 18 months, in time to mark the storied company’s first victory there 50 years ago? Camera crews from 60 Minutes Sports were along for a wild ride, recording a road to victory so bumpy at times, that winning seemed more and more improbable as the big day approached.

Sharyn Alfonsi speaks with an often frustrated, disappointed and finally elated Ford Performance chief Dave Pericak as he pursued the dream that turned out to be the motorsports story of the year. Ford Full Throttle, the story of Ford’s unlikely victory at one of the world’s most grueling car races, will be featured on an all new edition of 60 Minutes Sports on Tuesday, September 6th at 8pm ET/PT on SHOWTIME.

Ford hadn’t raced at Le Mans competitively since 1969, but it put untold millions and manpower to design and build a V-6, 600HP engine. Then it created a state-of-the-art body around it. The GT supercar would need to race at top speeds for a full 24 hours.

60 Minutes Sports cameras record each step of the way, from design to building and perfecting the GT, and assembling the race team at Ford Chip Ganassi Racing. They capture the heartbreak of its disappointing run-up races to Le Mans. At the Rolex 24 at Daytona, both its G-T models in the race broke down. Next came the 12 Hours of Sebring, where one of them crashed on a rain-slicked track and then the other spun out while making a run for the lead. In June, a couple weeks before Le Mans, few thought Ford was in the driver’s seat.

“You always hear, ‘Don’t let them see you sweat,’” said Periack. “So what’s going on inside my head is frustration, disappointment, questioning…did I do all the right things?”

But Ford persevered and ultimately came out victorious, and you can witness this miraculous feat firsthand on next Tuesday night’s episode of 60 Minutes Sports on SHOWTIME.