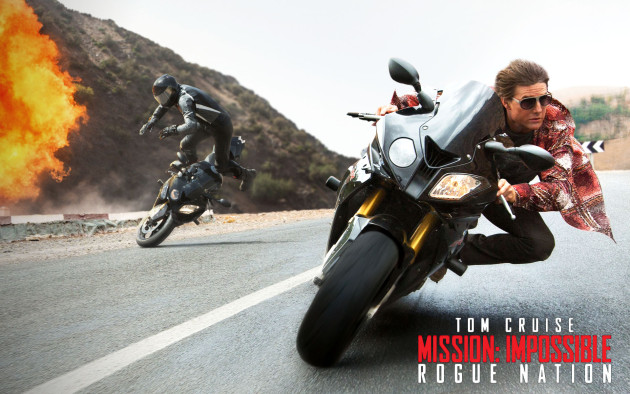 What’s a spy to do without the element of surprise? It’d be terribly easy for the Mission: Impossible franchise to sputter out right off of it’s massive comeback. After all, once all eyes and hype levels are on a particular film, that is very often the one that falls short in the end. Going for a different feel by again opting to change directors from Brad Bird to Christopher McQuarrie (Jack Reacher) is already a gamble, as it would be very easy to just re-hash what worked like gang-busters back in 2011. However, judging off how well this mission was pulled off, we may very well be saying the same things about whatever the next ‘Mission’ ends up being.

Following the mayhem of Ghost Protocol, Ethan Hunt (Tom Cruise) has spent the year in between hunting a shadowy group of operatives called The Syndicate who are made up of former black ops soldiers previously presumed dead who act as a counter IMF. Just as his trail starts to come up hot through his discovery of The Syndicate’s leader Lane (Sean Harris), the IMF is disbanded by a testimony by bureaucrat Alan Hunley (Alec Baldwin). Now a fugitive looking to take down an entire agency, Hunt must rely only on his friends, Benji (Simon Pegg), Brandt (Jeremy Renner), and Luther (Ving Rhames), as he finds himself in deep mistrust of his closest link to The Syndicate, a British agent named Ilsa (Rebecca Ferguson) who seems to be constantly switching sides to suit her own needs.

Mission: Impossible – Rogue Nation distinguishes itself by returning to the more suspense oriented tone of the original, while still cranking up the massive action sequences that have made the sequels more beloved. This is the first time that a Mission film has had a writer/director, and it shows. Christopher McQuarrie spins a masterful web of espionage here, and then brings it to life with some of the most spectacular craftsmanship seen in a blockbuster film in quite some time. He potently captures a sense of paranoia that kicks in from the moment the movie starts. Anybody can be a friend or a foe, and there is always a new complication around every corner. For the first time in a while, it feels like Ethan Hunt is genuinely in danger, and that vulnerability only adds to just how amazing the film is once it blows up into action. 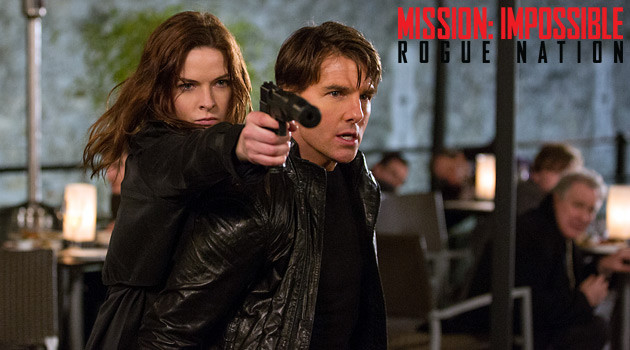 Cruise jumps at the chance to make Hunt a more human hero again, and the screenplay backs up his near-perfect performance by never taking him out of character. There is no forced romantic affair between he and Ferguson (who is a revelation here), or silly decisions made for the sake of action. We want Ethan to survive because while he is a human being, he is also a fiercely intelligent tactician who refuses to give up, and McQuarrie understands this better than any other MI filmmaker has to date. Harris also shines as one of the most chilling adversaries Hunt has gone against to date, who always seems to be one step ahead of the game with an icy cool that makes it look easy. Where some of this rich characterization begins to suffer just a little is in the supporting team members. Pegg’s Benji might get a great deal to do, including his most emotional moments he’s shared with Hunt to date, but Renner and Rhames are unfortunately sidelined a bit. This is especially a shame for Renner, who adds such a sobering sense of humor to these movies, and in yet another franchise finds himself sidelined as a third banana. While this movie may not make the mistake of becoming ‘The Tom Cruise Show’ again, we don’t quite get that team camaraderie that made Ghost Protocol such a delight.

Not only is the pacing relentless, with constant action, but those combat sequences are a consistent delight. McQuarrie firmly establishes himself as one of the strongest directors of mayhem in the business here, weaving his camera in the perfect positions to make sure every one of these beautifully practical stunts get to be shown off in all their glory. There’s weight and brutality to every single hit here, and McQuarrie will often opt to draw out the tension to the point that there won’t be a single breath in the entire audience. Most people will naturally draw their attention to the much publicized plane stunt that opens the film, and while that’s an amazing sequence, the one I would highlight is a fifteen minute dance of death in an opera house that might be the best single scene in the entire franchise.

Mission: Impossible – Rouge Nation might not be quite as much fun as Ghost Protocol, but it makes up for that by being perhaps the most impeccably written/directed film in the franchise thus far. It’s a masterful concoction of blockbuster mayhem, that will catch you by the lungs, run your heart on overdrive, and not forget to make you laugh every once and a while. If this franchise can keep on chugging at this quality level, we may be seeing Cruise hanging off a mountain in a wheelchair in twenty years, and not question it one bit.