Remember that awesome mechanical keyboard I reviewed a while back, the BlackWidow Tournament? Well the company that makes it, Razer, has just announced that they are teaming up with Koenigsegg to make a special edition laptop. Yes, the 1000+ horsepower supercar maker from Sweden, that Koenigsegg.

The laptop is styled after the Agera R, complete with lime green details, jet black finish and a large Koenigesseg logo emblazoned on the top. 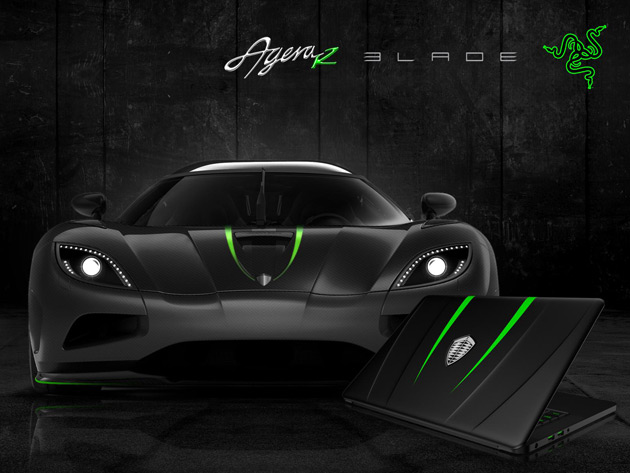 Ir you aren’t familiar with the Blade laptop from Razer, please let me introduce you. It is a gaming laptop that is as powerful as the stuff you can get at Alienware, but its about as thin as a Macbook Pro. That makes the Blade the thinnest gaming laptop in the world. It is 100% a case of having your cake and eating it too.

As it should be, the Koenigsegg version of the Blade is a max spec model, complete with 512GB SSD, Intel Core i7 CPU and an Nvidia video card.

Sadly, you will not be able to buy this laptop. Razer says that only a few Koenigsegg owners and Razer fans will get a chance to own one of them.

The laptop will be unveiled at Geneva in a few weeks, but if you want more info beforehand, here is the full press release from Razer. “Every single detail of a Koenigsegg car is measured against our continuing goal to enhance vehicle performance,” says Koenigsegg Automotive AB CEO Christian von Koenigsegg. “This is reflected in everything we do. Nothing is insignificant. We find our doppelganger in Razer—a company inspired beyond conventional reason to design products for extreme functionality and fun.”

The relationship is tethered between Koenigsegg’s headquarters in Ängelholm, Sweden and Razer’s San Francisco design offices, through which Razer’s roster of in-house scientists and engineers are focused on developing cutting-edge technology.

The partners plan to inaugurate the Razer-Koenigsegg relationship with a limited edition of custom not-for-sale Blade laptops, which a select few Koenigsegg owners and Razer fans will get to use.  The gaming system will boast power that belies its ultra-thin chassis, which will be CNC machined and appointed with unmistakable Koenigsegg cachet. The Koenigsegg Razer Blade will be unveiled at the Geneva International Motor Show in March 2014, where it will show off its performance, letting a lucky few drive virtual Agera R´s in the best possible setting. Both Razer and Koenigsegg see this collaboration as a first step in a long relationship from which more exciting products can be born and brought to market through the collaboration.

“As far as I’m concerned, Koenigsegg is the archetype by which all design innovation may be measured universally—a company hell bent on combining beauty, performance and sheer power,” says Min-Liang Tan, Razer co-founder, CEO and creative director. “Our shared obsession with extreme performance makes working with Christian and his crew an exciting project and an honor.”