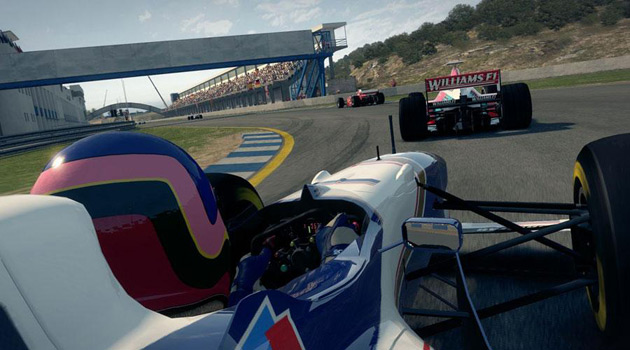 It’s almost certain that every Formula One fan secretly wishes they were a real racing driver. Whether we’ll admit it or not, the undeniable truth is that for eight months of every year we’re glued to the TV, as some of the most expensive cars in the world fight it out around the globe to be the quickest, the most mechanically advanced. We sit there and try to recreate the experience in our minds; the nerves, the pressure, the weight of a million pairs of eyes tracking your every move, knowing that the slightest mistake could spell disaster at 200mph.

Picture it now: the British Grand Prix. July; Silverstone; the starting line-up. The lights come on, one by one. You take a deep breath…

The lights are out, and you’re off. The first corner – your worst nightmare; everyone knows something always happens at the first corner. If you can just get through this… and suddenly you are. You’re through the new complex of corners, and down into Brooklands. You’ve got another car filling your mirrors, but you’re ahead, you’ve got the racing line. Then you’re onto the Hangar straight, on the limiter but you’ve got defend, braking late into Stowe all the while knowing that the finish line is only seconds away. Flags of every color flash past in a blur.

You might not win. You might not even get a podium finish. But the sheer exhilaration of putting every ounce of thought and heart and soul into maneuvering this beautiful machine around the 3.66 miles of Silverstone’s circuit is invigorating, exciting – and in the FIA’s latest official release, F1 2013, breathtakingly realistic.

The game is based entirely on the most recent Formula 1 season, so you’ve got this year’s constructors, drivers and cars to work with. The circuits are almost eerily lifelike, and changes to the game’s graphics mean the weather is now more realistic than ever – at Silverstone, it’s almost certainly going to rain at some point. Spray covers the track, the car, your visor, and the closer you are to the driver in front, the worse it gets. If that’s not racing realism, then what is?

They say the devil is in the details, but with F1 2013 the flames of Hell are conspicuously absent, such is the skill with which the coders have designed and recreated the tracks we know and love. Silverstone’s international pits straight – recently relocated to suit the new circuit layout – is shown in all its glory, with pit stops themselves both built in as an integral part of the game, and accurately enacted to give you a real sense of the dedication, concentration – and yes, a certain amount of driver impatience – which make up a Formula 1 pit stop.

For anyone who isn’t a Formula 1 racing driver or, alternatively, can’t make it to Silverstone to see the British Grand Prix in all its glory, then playing F1 2013 is categorically the next best thing. A consolation bonus (and a considerable one at that) is the game’s inclusion of a Classic Mode, where you can relive Grand Prixs from years gone by, and race as legends such as Schumacher, Mansell and Hill, as well as taking their classic car models out for a spin.

The only thing I think this game is lacking – which any game will lack – is the thrill and buzz from the crowds. The atmosphere at iconic circuits like Silverstone – places where F1 legends are born – are impossible to recreate, and I wouldn’t want Codemasters to try. It takes something away from the sport to try to put something so vibrant into a CGI game. There’s got to be something left to set the real thing apart from the game, and at Silverstone it’s the sense of awe, respect and passion that this circuit inspires in drivers and fans alike.

Still Can’t Decide Between The Xbox One And PS4?