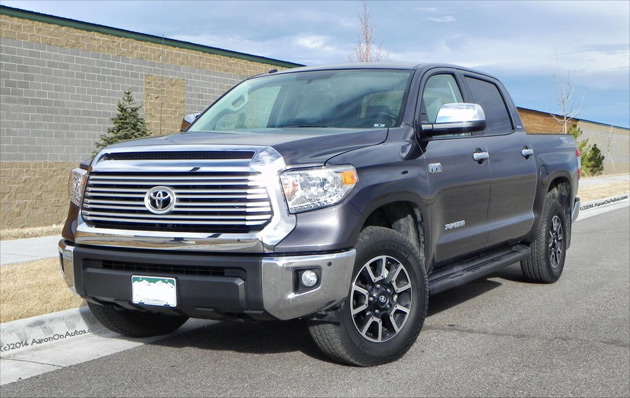 The 2014 Toyota Tundra sees a lot of changes compared to the outgoing model, including a bold new body style and ergonomic improvements on the interior. What hasn’t changed is the powerful, gas-guzzling, and capable reputation the Tundra has. So while a lot has changed for the 2014 Toyota Tundra, many things are still the same.

With their entrance into the full-sized truck market a few years ago, Toyota decided not to go with the “cookie-cutter our current truck and size it to fit” mentality of the industry. The Tundra was nothing like the smaller, midsized Tacoma. Instead, it was a big, beefy, but still refined-looking pickup that immediately caught the eye as competition for the then-aging designs of the Ford, GM, and Dodge products on the road. Fast-forward half a decade or so and, well, the Tundra was starting to look pretty small potatoes in comparison to the other big boys and their model improvements. 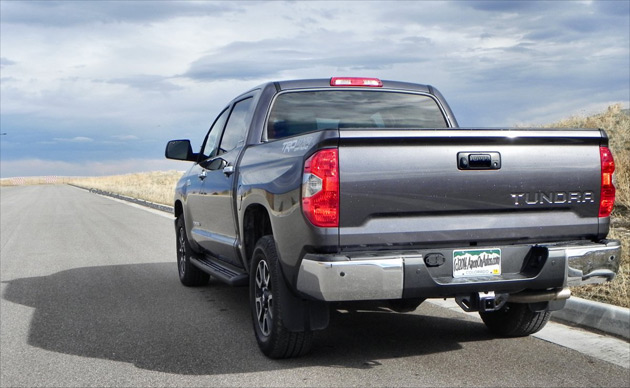 That has changed with the new 2014 Toyota Tundra, which we test drove for a week in its Limited package out here in the wilds of Wyoming.

The 2014 Tundra sports a beefier, more macho charisma. The hood sits higher, the grille is wider and is now covered in chrome by default, and the headlights are more slanted. Workingman three-piece bumpers adorn the front and rear (also standard) and squared, straight lines dominate throughout the Tundra’s new look, giving it a more robust and “Git ‘R Done” appeal. With all of these updates on the exterior, though, a few things remain. The signature “sport coupe” roofline is still there, with the rear windows narrowing to create a faster-looking cab. The outdated and generally useless plastic bedliner is also there by factory-install default, but the rear hatch is not only more square (in line with the new body style) but now sports a stamped “TUNDRA” rather than the previous painted-on decal.

Inside, the 2014 Toyota Tundra sees a lot of much-needed improvements. Although the driver’s side grab-handle for climbing in is no longer there, the steering wheel is beefier, the instrument cluster is shallower and easier to read, and the center console is pushed forward to allow easier access. A direct comparison with the 2013 Tundra shows that the driver’s cockpit is now far more ergonomic and the long reach and unbalanced daily use has been remedied. 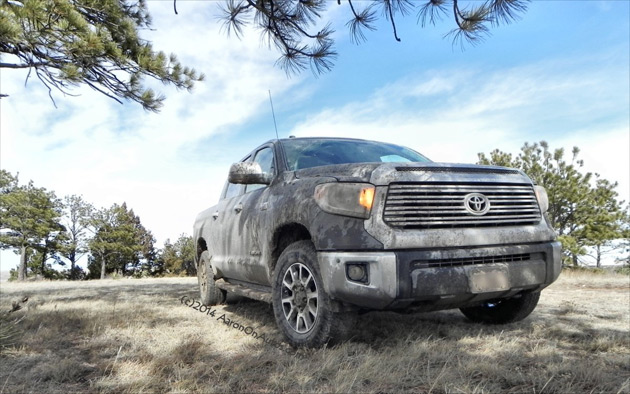 The cavernous center storage bin remains, thankfully, as does the easy-use shifter and the light-touch steering the Tundra is known for. The passenger’s side features a lighter dashboard with a slightly higher glove box for more leg and knee room. In the rear seats of the CrewMax we drove, things have also changed, but not entirely for the better. A big beef among Tundra forums and owners is the loss of the class-exclusive slide-and-recline rear seating in favor of some kind of weird under-seat storage thing that seems to have been only halfway realized. Parents will note that installing child safety seats in the back is now more difficult as well thanks to those seats being fixed in place.

Still, the sliding rear glass (another class-exclusive standard) is still in place, as is the overall hugeness of the Tundra’s interior for everyone, no matter their seating position. At six feet, three inches and with friends of similar beef-eating proportions, any chair in the 2014 Tundra is plenty large enough to sit in comfortably with head, shoulder, leg and hip room being more than accommodating. 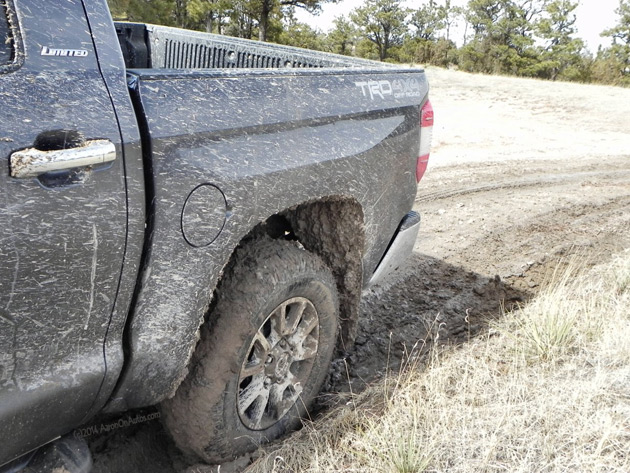 Out on the road, the 2014 Toyota Tundra retains its unforgiving ride, seeing very slight improvement in the chassis, but not enough to really feel a difference. The up side is that under load, it rides smoothly, and off the road, it’s a mud-slinging madman when the TRD package is added.

Under the hood, your choice of a V6 or two V8s are offered. The smaller V6 engine offers slightly better fuel economy with the trade-off being that the towing and cargo carrying capacity of the truck is nearly nil. The mid-range V8 is a 4.8L pumper that will probably do what most people ask of this truck – light-duty towing and helping your friends move before loading up for that weekend camping trip. The larger, extremely muscular 5.7-liter V8, though, is where it’s at if this truck is to be a workhorse. It’s a capable guzzler, giving one of the best towing capacities in the industry while offering a sure-footed muscularity and wide-open growl when the pedal is shoved to the floor. 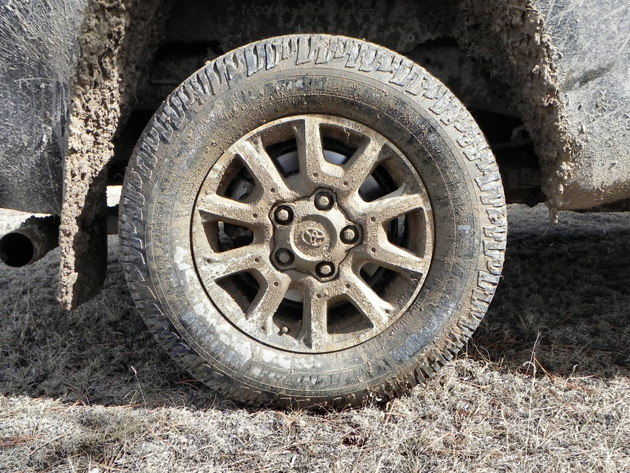 This being Wyoming, and it having rained heavily during our week with the Tundra, we spent a lot of time out in it. Few things can best a Tundra TRD for fun times in the bog. The 2014 Tundra Limited TRD slings mud, flings dirt, and jumps hills as good as its predecessors  which are all very good at these essentials.

We paused a few times to set up a camera to catch some of the fun. Two things to note about the 2014 Tundra in the mud: the easier-reach to access things like the drive-train setting makes it easier to do some more advanced mudding maneuvers and the door handles tend to stick open when they’ve caked in it, so wipe them off occasionally.

All in all, the 2014 Toyota Tundra is a nicely-improved truck over its previous generation. Although the truck’s fuel economy and highway ride are still behind the curve compared to the rest of the industry, all of the solid engineering that has made this a popular pickup truck is still there and the great new look it sports will likely attract new buyers.

Speaking of great looks, stay tuned for a look at the beautiful new 2014 Toyota Tundra 1794 Edition, which we just finished test driving for a week.

Related Topics:2014 Toyota TundraToyota
Up Next

Taking The Covers Off Of The Valvoline Reinvention Project Trucks

The 5 Most Fuel-Efficient Trucks of 2014