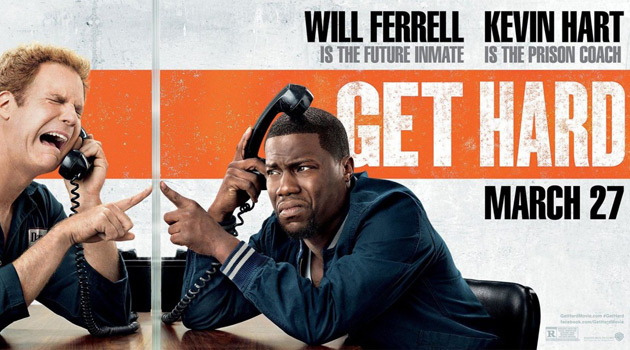 It seems as though there isn’t a buddy movie without Kevin Hart in it these days. Teaming up with the likes of Ice Cube, Josh Gad, and in the near future, Dwayne Johnson, the wildly charismatic funny-man seems to be able to pair with just about anyone he wants. However, what he somehow has never had until now, is an elite comedian to play off of. Yes, Hart and Will Ferrell seem to be a match made in heaven, as Farrell certainly knows a thing or two about having a period of being in seemingly every movie under the sun. So let’s see how they did in Get Hard, shall we?

James King (Will Ferrell), a man who has accumulated a great deal of money through cooperate investments is living the prime rich white man life. Servants answer his every beck and call, there’s a big promotion in his future, and he’s even got a hot trophy fiancée (Allison Bree) to bang when he has a minute. Hell, I don’t even think there’s a color that isn’t white in his entire house. However, he finds all of that is about to come crashing down when he gets incarcerated into maximum security prison for embezzlement that he believes he didn’t commit. Terrified, he enlists the help of car washer Darnell (Kevin Hart) whom he assumes has been to jail (although Darnell is a perfectly average family man), to help him prepare. Needing the money, Darnell bucks up, and goofiness ensues.

Get Hard has been taking a lot of heat for it’s apparent racism and homophobia, and while some of those complaints may be valid, they are also slightly wasted on what is at the end of the day just a silly comedy. Yes, stereotypes run rampant here, and some of them even seem rather dated and out of touch, but to the film’s credit, nobody is left out of the loop on that tomato throwing. Everyone’s an idiot here, and as such, I felt fairly ok enjoying this goofy little movie for what it was, even if it certainly isn’t anything special.

While this may not be the most rapid fire of comedic duos ever put on screen, these guys do what they can to help the silly set ups that they have. Ferrell plays up the silly, out of touch one percenter to the highest degree he can, ringing the biggest laughs out of the moments where that exterior starts to break (particularly when he starts inventing his own style of trash talking). Meanwhile, Hart is funny doing just about anything, and his reactions to Ferrell’s ignorance can sometimes save a badly written scene. I wish the two had some better back and forth, as they mainly shine when they’re given something more individualistic to do (Hart launches into a solo conversation between three different characters at one point that is actually really impressive), but they certainly carry what is ultimately pretty trite material.

I can’t help but think that perhaps rookie director Etan Cohen (who strangely enough helped write Tropic Thunder) was just not the right guy to take this on. He seems lost, not only in crafting solid set ups for these guys, but also in general filmmaking technique. This premise really could have made room for some genuine social commentary, especially if it took more time to either validate or invalidate Ferrell’s fears. However, since so much of it is training, it’s all hypothetical and as such, there’s never any real stakes to really make the laughs feel earned. Beyond that, there’s some really awkward editing here, particularly in the beginning, where between flashing back from an odd opening of Ferrell sobbing, to establishing the characters, does not begin the opening credits sequence until almost ten minutes into the film.

If Get Hard had opened in 2006, it just might have been one of the most popular comedies of that year. The stereotypes it employs and clichéd buddy troupes certainly would have felt more at home there. However, there is a fair amount of enjoyably and laughter to be had, particularly because Ferrell and Hart are just so talented and likable that if one can put the stupidity aside, they might have some fun. I won’t deny I enjoyed watching it, but if it were to ever come across my TV guide, I’d probably keep it behind bars.

Win A Copy Of ‘The Hobbit: The Battle of The Five Armies’ On Blu-Ray