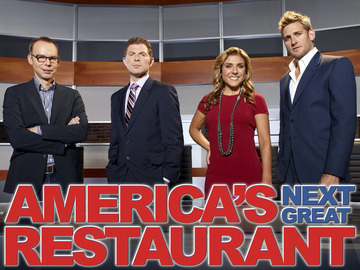 I’m a sucker for realty food shows, whether it’s Top Chef, Hell’s Kitchen, MasterChef, or even something goofy like Cake Boss. So when I saw the promos for NBC’s latest reality TV show America’s Next Great Restaurant, I had to give it a shot.

The basic premise of the show was simple. People pitch their ideas for the next great fast-food/fast-casual restaurant, and compete against one another in weekly challenges. The winner will see their original restaurant concept spring to life, starting with the opening of a restaurant chain in three locations – Hollywood, Minneapolis and New York City.

If you want to see how things played out, all of the episodes are streaming on NBC.com.

To me, the obvious choice was Brooklyn Meatball Co – Who doesn’t like meatballs?? Especially if you’re thinking with franchising in mind. Any of these stores could work as a one-off, but does America want 4000 soul food places?

The other two options are too niche, and alienate a large percentage of the population. You couldn’t pay me to eat soul food, and Indian food that resembles a burrito doesn’t really do much for me either.

But against all odds, Soul Daddy came out on top, and the three restaurants opened up last week! Initial reviews on the foodie review sites are mixed. Most people are annoyed that you can’t order Fried Chicken, which was the owner’s claim to fame! There are complaints that food is heated over a heat lamp, and are served luke-warm at best. And the food is on the expensive side.

For right now, the restaurants appear to be doing well, thanks to the buzz from the show. But how will things look a year from now, when people have forgotten about the show and the restaurants have to perform on their own merits? Only time will tell..